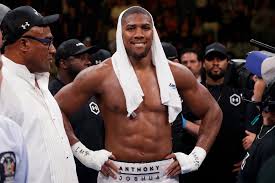 Nigeria-born British boxer, Anthony Joshua has explained why he will soundly defeat Tyson Fury and that, according to Joshua, is going to happen in the sixth round.

The two boxers have agreed to fight twice next year. The two heavy champions have agreed in principle to fight next year to establish the undisputed heavy world champion.

The bouts would determine the first undisputed champion since Lennox Lewis’ reign ended 20 years ago.

Joshua must first overcome mandatory challenger Kubrat Pulev while Fury is due to take on Deontay Wilder for a third time later this year.

Assuming they come through unscathed, the Brits could touch gloves next summer.

And Joshua told Sky One: “I have a lot of respect for the man, he’s a good family man and a good fighter, but on the other hand, I want to break his head.

“First six rounds, I think, well I know I’m going to take him out then.

“I have had a shorter career, so I’m fresher. I’ve been in the deep end longer so I can handle the pressure and I believe I’m going to take him out.

“Fury drew the first (fight with Wilder) and then rejigged his game plan and took Wilder out and schooled him really but I think I’m faster than Wilder anyway, call it what you want, I believe I’m better.”

Joshua and Fury are expected to return to the ring for their respective final hurdles in December but the dates remain fluid due to the coronavirus crisis.

Their bid to crown an undisputed champion was accelerated last weekend when Dillian Whyte was knocked out by Alexander Pokvetin.

Victory for Whyte would have guaranteed him a shot at Fury or Wilder before the all-British clash, but he must now go back to the drawing board.

The Londoner will first have to rematch Povetkin and may then have to wait a further 12 months for his shot.

(OPINION) FFK’s needless outburst: This is no time to keep quiet