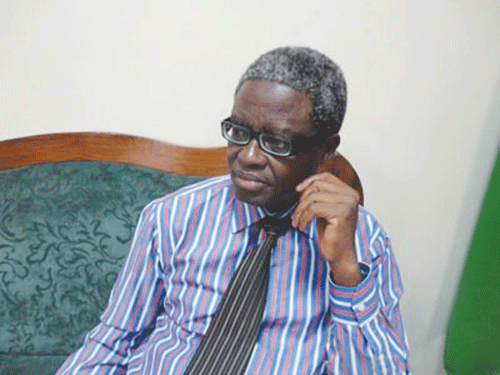 A former Director-General of the Nigerian Institute of International Affairs (NIIA), Prof. Bola Akinterinwa, has said that the Federal Government of Nigeria could not arm-twist the government of Benin Republic into extraditing Yoruba Nation arrowhead, Chief Sunday Adeyemo otherwise called Sunday Igboho.

He said this was because the Benin Republic, like other former French colonies, represents French interest in West Africa. Benin Republic (formerly known as Dahomey) gained full independence from France on August 1, 1960.

The diplomat spoke on Wednesday while featuring on PUNCH Online interview programme, The Roundtable.

The septuagenarian also advised the Federal Government to stop the use of force on agitators and explore amicable resolutions.

The regime of President Muhammadu Buhari, had, in recent times, clamped down on secession agitators from Southern Nigeria.

The agitators had set out to break away from Nigeria, citing dissatisfaction, perceived injustice, and insecurity.

Leader of proscribed Indigenous People of Biafra, Nnamdi Kanu, is currently in the custody of the Department of State Services after he was extradited from a foreign country.

Similarly, the Buhari regime declared Igboho wanted and the regime has been pushing for the extradition of the activist who was arrested by Interpol in Benin Republic on Monday at the behest of the Nigerian government.

The PUNCH had earlier reported that Nigeria’s Ambassador to Benin Republic, Lt. Gen. Tukur Buratai (rtd.), an immediate past Chief of Army Staff, has been pushing for the extradition of Igboho to Abuja.

However, Igboho’s lead counsel, Yomi Alliyu (SAN), noted that his client could not be extradited because the 1984 Extradition Treaty between Nigeria, Benin and two others excluded political refugees like Igboho and his wife, Ropo.

The PUNCH gathered that the Federal Government planned to extradite the activist on Wednesday (yesterday), but the Benin Republic insisted that it would not be part of any process that was against due process.

Responding to a question on The PUNCH interview programme on Wednesday, former NIIA DG Akinterinwa said, “At the level of Benin Republic, if you are talking about arm-twisting, an elephant, even a lion, as big and powerful as it is, if it is bitten by a small mosquito, then you can know the consequences. It is not a question that Nigeria is big and powerful that you can arm-twist anybody, no, it doesn’t work that way.

“So, any battle, any arm-twisting that you are thinking of should be put in the context of French interest and particularly the Francophone interest.

“Any misunderstanding between a Francophone country – whether an immediate neighbour or far distant neighbour – is necessarily an issue at the level of Nigeria and the Francophone community; they think alike, they work together, they address issues together.” (PUNCH)