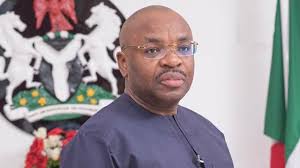 The Chief of Staff to Governor Udom Emmanuel of Akwa Ibom State, Mr. Ephraim Inyang, has said that the pandemic has distorted so many plans of the state, saying that there were so many things that would been completed but for the restrictions of movement.

Inyang who stated this while speaking with newsmen, in Uyo, the state capital, said the coconut refinery located at Mkpat Enin Local Government Area of the state, was billed for inauguration in 2019 but delayed because of the pandemic.

According to him, the restrictions have made it impossible for the Indian Nationals to come and install the equipment, adding the situation is still bad till date.

Inyang said, “Government had programmed the coconut refinery to be commissioned in 2019 but COVID-19 delayed the arrival of Indians who were to install the equipment, the restrictions have made it impossible for them to come now and they may not because everybody is aware that the COVID-19 situation is bad, even from Turkey.

“So, there is no magic we can do because we don’t have capable hands here. The equipment are there but for now there is nothing we can do about the COVID-19.

“You can see that we have a problem because the coming of COVID-19 has distorted a lot of plans.

“A lot of things we were supposed to do can no longer be done and then resources at the centre which seems to be our only source is no longer adequate.

“So, in all, the foundation for industrialisation has been laid and the governor had the intent that by the time he leaves office in 2023, this and that must have been completed but circumstances beyond him has made it impossible.”

However, he said the governor has been able to revitilise the economy and taken it from a dependent economy to an independent one.

“I think in all sincerity, Governor Emmanuel came with a strong desire to take the state away from central allocation, civil service, sharing of the money to a sector that is independent of whether there is allocation or not in Abuja because we may get to somewhere in the future where there will be no allocations from Abuja again.

“Our state before 2015 was basically waiting to receive money from Abuja at the end of every month.

“The private sector was dead before Governor Emmanuel arrived but today I can say clearly that this has changed.

“Laying foundation for a new thing is never easy, it is always the most difficult of any project. So, the governor came to lay a solid foundation for industrialisation and although it was slow at the beginning that foundation is now a stable one,” he said.

OPINION: Wike must not be allowed to destroy PDP