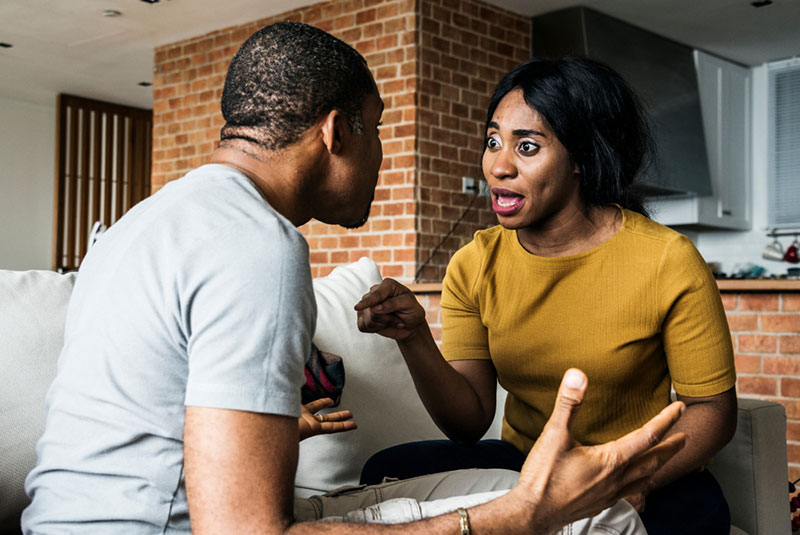 Last week, we brought to bear some things that women do at home that men do not just hate but that scatter marriages. Some women in their texts thought I was being partial. They said men are also guilty of broken homes in one way or the other. I am not against this observation and like I had planned to do, the previous week was in favour of men, this week is not.  We shall be highlighting some of the things that men do that displease women are responsible for bitterness in marriages.

Just as we indicated last week, there is no perfect person in this world. However, the ability of anyone to see and admit where he or she is going wrong is what makes any relationship gets better. For women, things that most men consider as very minute is what drives them nuts. Whether you’re trying to redefine yourself in the dating scene, impress your girlfriend, or just want to understand women better, here are seven things that women absolutely hate about men and how to avoid them.

Being a mummy’s boy

No woman appreciates a man who cannot utter two statements without mentioning his mother. It is a sign of immaturity and an indication that he will not be able to protect her.  As a full – fledged gentleman, therefore, it’s important that you take decision on your own and on her behalf, standing to defend her at all times.  If you are the type that finds a reason or the other to run to your mum’s place, know that your wife inwardly detests you. She is simply not proud of you.

READ ALSO:The controversial tax debate: SHOULD CHURCHES PAY OR NOT?

Women hate it when you act like an army officer over them especially when friends and relatives around. If you are the type who feels good only when you dish out rules to her, she is not happy with you and prays that you change one day.

Some people call this selective hearing. It’s an irritating habit for a gentleman to be forgetful or finds it hard to remember important dates and matters. If you can’t remember your wedding anniversary, her birthday and any of the kids, she is not happy with you. Like wise matters of importance. If you can’t remember when to pay school fees, house rent  and other important fees and visitations, she does not like it because you are acting like an empty barrel. Every woman loves and respect a man who is intelligent at all issues.

Endless talk or speeches are naturally associated with women. So, when a man is found to be a talkative, women are put off.

Man gives wife annual rating of her ‘housewife duties’ including…

Women love attention and she wants to be cared for. As much as she might try and make you think otherwise, a woman doesn’t want to be constantly nagged for attention and she does not want to beg for attention from her man. She loves to be taken out intermittently and be showered with gifts. Ignoring messages, delayed replies and short responses just irritate women. Remember, a good text can go a long way. Being consistent with your messages helps establish trust between the two of you and will go a long way in building the relationship. Asking questions, replying quickly makes you come off as genuine and caring. You’ll certainly score more points with her and other friends.

Every woman loves a gentleman who can make a quick, set-in-stone decisions. Contrary to what you might think, a woman really doesn’t want to be harping on at you to make up your mind; she wants you to do it yourself. She does not like a man who constantly changes plan. So, be a gentleman; make a plan and stick to it.

Women can’t stand guys who are laid back.  Being a hard worker is a sign that you can not only take care of yourself, but that you can take care of her and other people as well. Of course, life can get hectic and frustrating at times, but the ability to stay focused and look at the positive side of life assures a woman that her man is real any day. If you are the type who easily gives up on issues, runs from tough times, feels down at times of trials and feels bad having to pick up the pieces of one’s life or fret at starting life all over at times of challenges, you present to her a weak man and she is disappointed in you.  Being bold and confident to do anything in the meantime to fend for the family makes any woman proud any day.

Whether you want to agree with this or not, no woman likes a tacky man. If you are a good dresser, your woman will fall in love with you over and over in your marriage.

Being full of yourself is a turn-off for everyone around you. Yes, it’s great to recognize your accomplishments, but trying to outdo other people or constantly gloating about what you’ve done makes you look like a tool.  Being overly protective and obsessive of your partner is another huge turn-off, not only for her but for everyone around you as well. There’s no need to monitor who she’s with or what she’s doing. A mature relationship requires trust, honesty, communication and openness.

Hunger drove me into music–Tim Godfrey