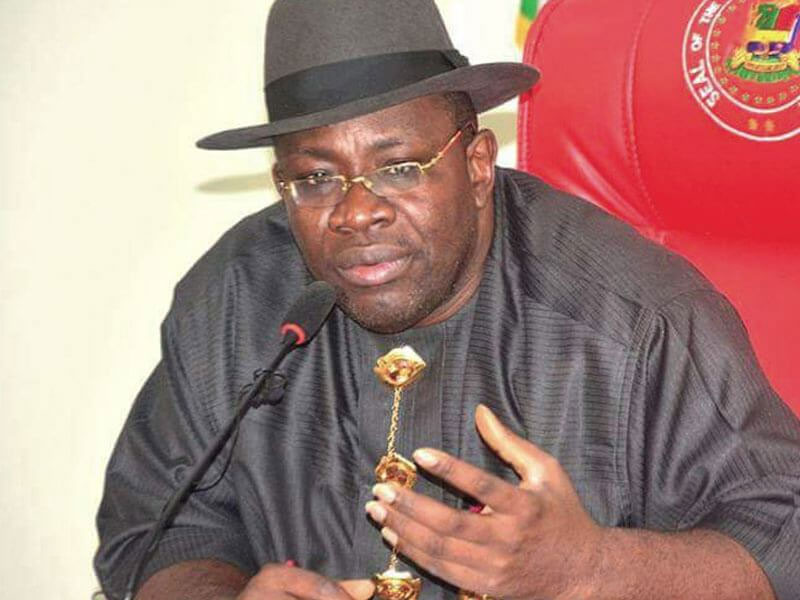 Governor Henry Seriake Dickson of Bayelsa State has said his administration would focused on investing in critical infrastructure that drive economic growth in order to attract investors to the state.

He stated this at the Africa CEO Forum in Kigali, Rwanda, where business and political leaders from across Africa and other parts of the world gathered for a two-day conference.

Governor Dickson was quoted by his Special Adviser on Public Affairs, Mr. Daniel Alabrah, to have said his Restoration Administration had made a lot of strides in various sectors so as to open up the state and enable people come to invest and do business.

His words, “We have made major strides. I keep saying that investment in education is the ultimate. We have built a lot of schools, schools and yet more schools, from primary to secondary.

“We have also built two universities – the University of Africa and the Bayelsa Medical University as well as a state polytechnic and college of education.

“We have done a lot also in the area of healthcare because you must keep the people healthy to enable them participate in what you are doing.

“We have provided wonderful health facilities and policies. For instance, our health insurance scheme is covering over 150,000 persons.

“We have a special programme for pregnant women to be able to address the issue of infant and maternal mortality. This is what it means to invest in the people. When you do that you are investing in stability and peace.

“We have invested in agriculture, infrastructure and roads. In road construction, we have dualised many roads in our very difficult terrain.

“We are not just building for the present but also for the future. Now people are talking about the airport that we built.”

He noted that the investment in infrastructure is an investment in the economy of the state and not just for the purposes of building roads, bridges or airport for their sake.

“It is because we want to provide the necessary infrastructure that will drive economic growth that can make people to come and invest and do business in Bayelsa. Now we are working on the deep seaport. All we are doing is to open up the state so we can bring the world to Bayelsa,” he said.

The Bayelsa helmsman, who had a joint session with his Ekiti State counterpart, Dr. Kayode Fayemi, also spoke about the BRACED Commission, saying the South South regional bloc was not dead but that more work needed to be done.

“In the South South, we have the BRACED Commission comprising Bayelsa, Rivers, Akwa Ibom, Cross River, Edo and Delta. The reason for such a regional bloc is that if the states came together, those things we cannot do individually, we may be able to pool our resources.

“For instance, we had the regional body encouraging all our states to invest in the power sector when Nigeria introduced privatisation.

“Now we have the 4Power Consortium Limited, which is jointly owned by Akwa Ibom, Bayelsa, Cross River and Rivers states.

“We used the company to acquire assets in the biggest power company in the region, the Port Harcourt Electricity Distribution Company, which we jointly own.

“The thinking was that we were going to proceed from that to invest in oil blocs. My state, and indeed my region, is where you have the oil assets in Nigeria and it has been so for over 60 years.”

He however said sometimes politics and political considerations affect well-intended programmes everywhere you have such blocs.

“This morning, I listened to the President of Rwanda explain his country’s current relationship with neighbouring Uganda and it struck a cord. Unfortunately, politics sometimes get in the way of most laudable programmes.

“I think a lot more needs to be done about the BRACED Commission. We have not given up on it. We intend to reinvigorate it because it is mutually beneficial to all of us.”

On the issue of the Africa Free Trade Area agreement that Nigeria was yet to sign on to, Governor Dickson said President Buhari and, indeed, the country should not be stampeded into such an agreement and that there could be good reasons for the delay.

“Clearly, I don’t think there is any doubt that the continental free trade agreement is in everybody’s interest in terms of free movement of goods and persons.

“But I believe that President Buhari and his economic team may have good reasons for delaying Nigeria’s acceptance to join the CFTA. I don’t believe we should be stampeded into such an arrangement.

“I think there should have been proper consultation long ago by the President and his government should have had a clear position for Nigerians to understand why it has not taken a decision to join the CFTA.

“I’m not speaking for the federal government. But while it is true that I might not know the full range of the issues, I believe there is need for more consultation and better communication.

“I would like at this point to believe that the president and his economic team feel that the country needs to study it more. I prefer to go with that for now.

“I however call for better communication on the issue and for more openness. Across the divide, there should be a robust and more inclusive dialogue as to why the country has gone silent on this issue.

“That is without prejudice to the point that Nigeria had always stood for African integration. In principle, it is in the interest of everybody to have that kind of agreement in place.

“But like we heard, two years is a very short time to achieve whatever is required and the delay is not too much.”