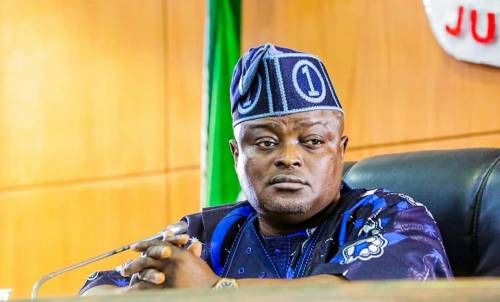 The Economic and Financial Crimes Commission (EFCC) has declared that it would look into the corruption allegations leveled against Speaker of the Lagos State House of Assembly, Hon. Mudashiru Obasa.

Hon. Obasa had been accused of embezzling public funds and abusing his office.

An online medium had carried out an investigation on the speaker who allegedly owns more than 60 bank accounts.

He was accused of using his office to misappropriate funds and allocate contracts to himself through third party sources, as well as other acquaintances.

The state house of assembly had cleared the speaker of the corruption allegations, saying the allegations were untrue.

Speaking, on Tuesday, at the Commission’s Lagos office, zonal head of the EFCC, Mohammed Rabo, said the anti-graft agency would give the petition against Hon. Obasa the attention it deserves.

Members of the Civil Society Network Against Corruption (CISNAC) had protested at the commission’s office while a petition was also submitted to the agency.

“We will give it the required attention. We have our process here. This is the first process. You have submitted. We will go through it. I assure you we will give it the attention it requires. Always do your things within the ambit of the law,” Rabo said.

A programme officer at CISNAC, Sina Odugbemi, said the Lagos State House of Assembly could not be a judge in its own affairs.

He said the EFCC must investigate the speaker for the public to know the truth about the allegations.