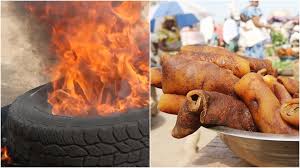 The Waste Management Society of Nigeria (WAMSON) on Wednesday decried the roasting of cow skin with disused tyres.

The President of the Society, Prof, Oladele Osibanjo, condemned the practice in an interview with the News Agency of Nigeria (NAN) in Lagos.

According to him, the government should ensure that those engaging in such practice desist, as it makes the cow skin popularly known as “Ponmo” carcinogenic.

“Burning or roasting of cow skin which has become choice delicacies in many homes and restaurants is bad.

“First, the practice makes the ponmo carcinogenic and injurious to health when consumed.

“God help those who eat such ponmo,” he said.

Osibanjo said that part of the problem was the non-passage into law of the National Policy on Solid Waste, Hazardous Waste Management and Regulations, presented to the 8th National Assembly (NASS). 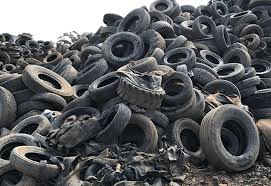 He said the bill would have addressed the issue of tyre waste and the huge resources there in.

Osibanjo said that used tyres could be used productively in making furniture, shoes, slippers and wire among others.

According to him, there are technologies which can turn used tyres into a huge business empire that will provide jobs for many people.

The professor of Chemistry, who said that the country still lacked some tools needed for sustainable development, noted that environmental stakeholders were waiting for the 9th Assembly to settle down before representing the bill, even though it would mean starting afresh.

He said that the experience from the last presentation made it obvious that the challenge was that the National Assembly needed orientation on waste management.

Osibanjo said the stakeholders would try to enlighten the NASS members on waste to ensure the approval of the bill, as it would go a long way in ensuring urban mining of huge resources from waste, if properly organised. (NAN)

US Govt. promises to partner with Lagos on security, education, health