Waidi Akanni made me have my best dinner as Governor -Ambode 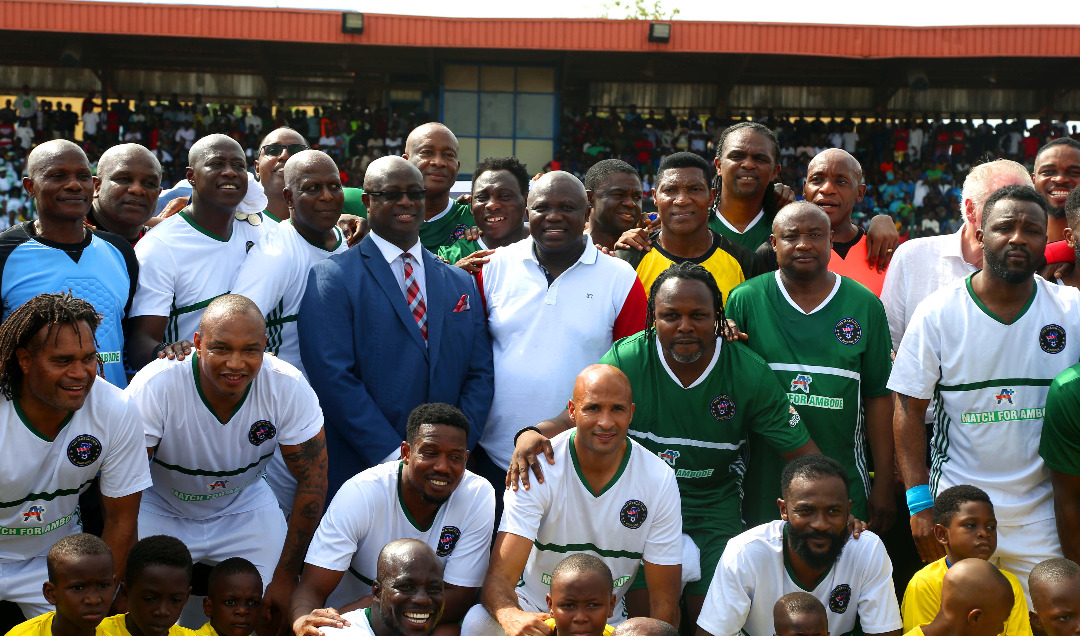 By George Aluo
Out going Lagos State governor, Akinwumi Ambode has declared that he had his best dinner as the state’s chief executive officer Saturday night, even as he gave the credit to Waidi Akanni, organizer of the African Legends versus Naija Legends game.
The game which was put together by The Match International was played at the Agege Soccer Temple Saturday afternoon in honor of Ambode.
Ambode who spoke while hosting the soccer legends to a dinner in his Alausa home said Saturday night was not just about football but a historic night in which African brotherhood was promoted and taken to the next level.
“This is a historic night and I must say that in the last four years since I became governor I m having my best dinner. I want to thank Waidi Akanni for putting this together and it is a bonding that won’t end tonight, we are going to be in this together,” Ambode stated.
Akanni who was still basking in the euphoria of the huge success the Ambode “thank you” game turned out to be, was equally full of praise for the governor for spoiling his guests a little.
“His Excellency Akinwumi Ambode has been wonderful. Right from when the legends started arriving, he gave them quality attention and wonderful reception. The African legends are happy with the way they have been treated and have confirmed that he (Ambode) is truly passionate about the round leather game,” Akanni said.
The African and Naija Legends settled for a 4-4 draw in the game in which virtually all the ex internationals showed that the game have not departed them.
Former Teranga Lions of Senegal captain El hadji Diouf, Abubakar Titi Camara, Tressor Lomana Lualua, Didier Zokora, Kanu Nwankwo, Austin Jay Jay Okocha, Emmanuel Amuneke, Garba Lawal and Tijani Babangida just to mention a few thrilled the Agege fans to the best of football, even as Edo State Deputy Governor, Rt. Hon. Phillip Shaibu stepped in to put some Executive touch to the soccer display.