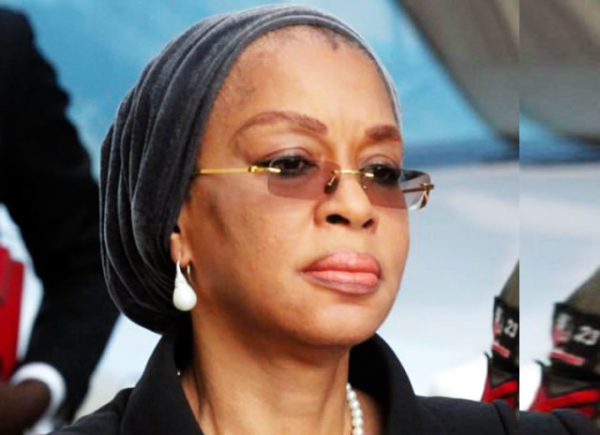 A Federal High Court Lagos on Friday heard that one of its judges, Justice Rita Ofili-Ajumogobia facing money laundering charges before the court has been hospitalised in a Lagos Hospital and could not stand trial.

The Economic and Financial Crimes Commission (EFCC) charged Ofili-Ajumogobia and a Senior Advocate of Nigeria, Godwin Obla, to the court on 18 counts charges bordering on Conspiracy, Unlawful Enrichment, retention of Crime Proceeds and Money Laundering.

The defendants are standing trial before Justice Rilwan Aikawa.

Each of them pleaded not guilty to all the charges and were granted bail in the sum of N10 million each with two sureties in like sum.

The defendants were first charged before an Ikeja division of the High Court which had struck out the charges on jurisdictional grounds.

Consequent upon striking out of the charges, the EFCC preferred same charges against the defendants, before the Federal High Court.

At the last adjourned date on May 18, first defence counsel Chief Robert Clarke (SAN) informed the court of a preliminary objection challenging the jurisdiction of the court.

In the same vein, second defence counsel, Chief Ferdinard Orbih (SAN) had also drawn the court’s attention to pending motions before the court seeking to separate the charges in favour of the second defendant.

Justice Aikawa had then fixed May 31 (today) for hearing of pending motions.

However, when the case was called on Friday, first defence counsel, Clarke, informed the court of a letter indicating the state of health of the first defendant, and indicating that she was currently on admission in the hospital.

He noted that it was important for a defendant to be physically present in court for trial, adding that in the light of the health status of first defendant, the court should adjourn the case to a further date.

“The essence of Criminal Justice is for the defendant to be present and listen to proceedings; trial has not begun, as what is before your lordship is hearing of the preliminary objections.

“Today’s proceedings doesn’t amount to commencement of trial, it is solely to determine whether your Lordship has jurisdiction,” he said

He argued that the presence of the defendant was vital for proceedings to continue, and therefore, urged the court to grant an adjournment.

This oral application was not opposed by second defence counsel.

But, the prosecutor Mr Rotimi Oyedepo in response, told the court that he had yet to read the said letter, and he requested to go through same in court.

After going through the said letter, Oyedepo noted that from the wordings of the letter, it was stated that the defendant was neither pale, nor distressed, and so, should not ordinarily serve as a basis for stopping trial.

Besides, he added that the defendant had an antecedent of such practice, adding that same was not strange.

“My Lord I will read this letter and I want to pay attention to the second and third paragraphs, which says that;

“And that she has had prior episodes of elevated blood pressure and on that account, she is admitted for observation at our facility,” he read.

Oyedepo argued that the report was a qualified one which shows that the defendant was at least not in distress.

Following the development and based on consensus of respective parties, the court adjourned the case until June 24 for hearing of the pending motions.

EFCC alleged that the defendants conspired on May 21, 2014, to indirectly conceal different sums of money, in the Diamond Bank account of Nigel and Colive Ltd, a company alleged to be operated by Ajumogobia.

They were alleged to have conspired to retain in same account, the sum of N500 million, which they both reasonably ought to have known formed part of proceeds of unlawful acts of unlawful enrichment.

The EFCC also accused Ajumogobia of indirectly concealing the sum of N12million in the same account, and making false statement to the EFCC that the money was payment for sale of a landed property.

The alleged offences contravene the provisions of Sections 15 (2) (a) and 18 (a) of the Money Laundering Prohibition Act, 2011.(NAN)