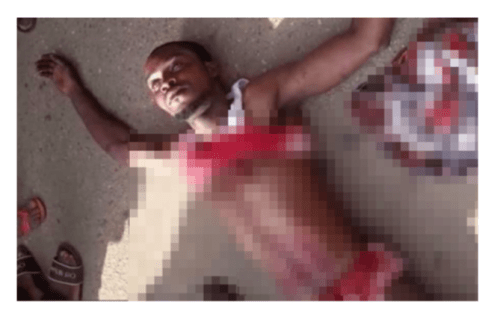 The Nigerian Xpress gathered that the yet-to-identified policeman, said to be an Inspector, had stabbed the deceased to death following his (deceased) refusal to pay a N50 bribe, on Thursday morning.

An eyewitness account had it that the collection of N50 bribe is a daily routine by the law enforcement officers at Ile-Iwe.

It was also learnt that refusal to pay the said amount attracts a temporary arrest, or the tricycle impounded and an even higher amount paid to secure the release.

According to reports, Thursday’s incident happened when the tricyclist was convening passengers and begged to pay the illegal toll later.

Reports has it that an argument ensued between both parties and the policeman allegedly stabbed the tricyclist, who died on the spot.

The Lagos State Police Public Relations Officer (PPRO), Adekunle Ajisebitu, who was called to confirm the incident said: “The CP has dispatched adequate Police patrol teams to maintain law and order there. No cause for alarm. Details soon.”