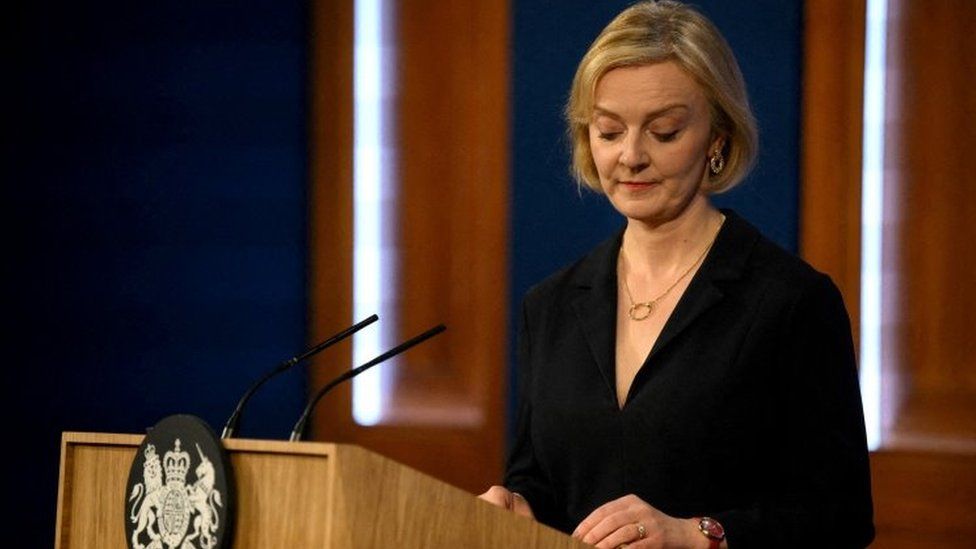 In a statement read outside 10 Downing Street, Ms Truss said the British people deserve a proper say on the country’s future

“I came into office at a time of great economic and international instability.

“Families and businesses were worried about how to pay their bills.”

She said she was elected “with a mandate to change this”, adding: “We delivered on energy bills.”

“I recognise, though, given the situation, I cannot deliver the mandate on which I was elected by the Conservative Party.

“I have therefore spoken to His Majesty the King to notify him that I am resigning as leader of the Conservative Party.

“This morning, I met the chairman of the 1922 committee, Sir Graham Brady. We’ve agreed that there will be a leadership election to be completed within the next week.”

Ms Truss will remain as PM until her successor has been chosen.

Her resignation came just a little over 24 hours after she told MPs she was a “fighter, not a quitter”.

There has been much speculation about who could replace Ms Truss, with new chancellor Jeremy Hunt one of the main names being suggested.

However, Sky News’ deputy political editor Sam Coates said he has been told Mr Hunt will not stand.

Ms Truss’ time in office has been dominated by market chaos prompted by the mini-budget that was announced by former chancellor Kwasi Kwarteng last month.

Despite sacking Mr. Kwarteng last week and reversing almost all the unfunded tax cuts that had been proposed, the prime minister’s position had continued to come under pressure.