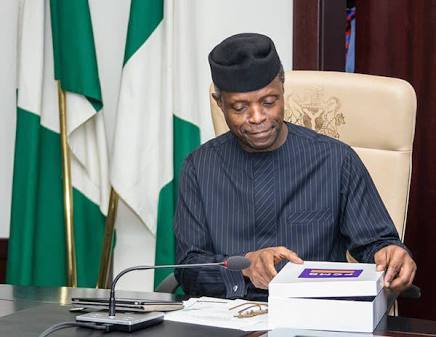 Two persons, including a student of the Department of Business Administration in the Ambrose Alli University, Ekpoma, Amos Ehis Asuelimen and Kelvin Ogashi, have been arrested for impersonating Vice President Yemi Osinbajo and wife of the President, Aisha Buhari.

They were arrested during a tactical operation carried out by the Edo State Command of the Department of State Security.

Parading the suspects before journalists in Benin City, State Director of the DSS, Brown Ekwoaba represented by the Deputy Director Security Enforcement, Mr. Galadima Byange, said the suspects have confessed to the crime.

Ekwoaba said; “Asuelimen confessed to have defrauded not less than five persons.

“He admitted defrauding not less than five persons whom he told to send money and recharge cards, in order to process their registration and subsequent eligibility for a loan of one hundred thousand naira each.”

“Ogashi confessed to have created an Instagram account with the name and picture of the wife of the president of the Federal Republic of Nigeria, Aisha Muhammadu Buhari for the purpose of swindling unsuspecting members of the public.

“He further confessed to have created the account in May 2019 with a message that the First Lady was empowering Nigerian youth with cash to start up their business and that interested persons were required to register with money. His accomplices are currently at large.

“You can see that the two suspects and even those listed to be at large are youths of productive age. While the two suspects will be charged to court shortly, this Service wishes to advise youths engaged or contemplating to engage in act(s) of this nature or other fraudulent behaviours, that there is no short cut to wealth. They should engage themselves in decent productive venture or risk being “guest” of law enforcement agents.

Ogashi said he is a tailor by trade but only used the image of the first lady and that he has not defrauded anybody with it.