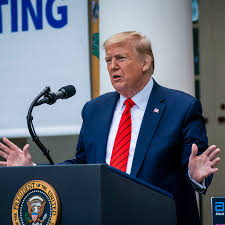 Members of United States President, Donald Trump’s cabinet have been discussing use of the 25th Amendment to the constitution to declare him unfit for office after the president encouraged his supporters to march to the Capitol and many of them ran wild inside the seat of legislative power.

It is a provision never used for the removal of a president against his will and faces extraordinary burdens to take effect.

Nevertheless, CBS News reported that Trump cabinet members had been discussing the idea.

The 25th Amendment, which also governs a president who voluntarily relinquishes power on a temporary basis, requires that the vice president and ‘a majority of either the principal officers of the executive departments or of such other body as Congress may by law provide’ inform the Congress that the president is ‘unable to discharge the powers and duties of his office.’

Several Trump cabinet members serve on an ‘acting’ basis and have not been confirmed by the Senate, lowering the number from the 16 threshold. A post election purge took out the Defense secretary, and Attorney General Bill Barr left before Christmas after a clash with Trump.

In an extraordinary statement, Jay Timmons, head of the National Association of Manufacturers, called what happened ‘mob rule’ and termed it ‘dangerous.’

“Vice President Pence, who was evacuated from the Capitol, should seriously consider working with the Cabinet to invoke the 25th Amendment to preserve democracy,” he said. Timmons is a former top aide to a member of the Senate leadership.

He used to run the National Republican Senatorial Committee years ago.

House Judiciary Committee Democrats wrote Pence urging him to invoke the amendment. “Even in his video announcement this afternoon, President Trump revealed that he is not mentally sound and is still unable to process and accept the results of the 2020 election,” they wrote.

“President Trump’s willingness to incite violence and social unrest to overturn the election results by force clearly meet this standard,” they wrote.

‘S too are his recent tweets, which Twitter has since deleted, saying the election was ‘stolen’ and that today’s riots ‘are the things and events that happen.’

“For the sake of our democracy, we emphatically urge you to invoke the 25th Amendment and begin the process of removing President Trump from power,” they concluded.

The 25th Amendment talk came after it was revealed that the acting Pentagon chief and chair of the joint chiefs of staff spoke with Vice President Mike Pence before activating National Guard to secure the Capitol.

Trump resisted efforts to deploy the Guard, the New York Times reported, and White House officials had to intervene to make it happen.

There was a long delay while U.S. Capitol Police sought to restore order – and some Democrats said it amounted to a coup attempt.

Even if Pence and half the cabinet agrees, the 25th Amendment move requires a two-thirds majority of both chambers if the president objects. But it could still allow Pence as acting president while the situation gets sorted out, effectively running out the clock on Trump’s tenure.

Asked about the idea in the Capitol, Sen. Mitt Romney (R-Utah), who denounced the attempt to overturn the vote, wasn’t optimistic. ‘I think we have to hold our breath for the next 20 days,’ he said.

NBC News reported that Transportation Secretary Elaine Chao, who is married to Senate Majority Leader Mitch McConnell, is considering resigning. That would change the ratio of votes needed to invoke the 25th amendment.

There was sign of Trump support evaporating in the Senate as members of the ‘dirty dozen’ caucus who had announced they would join Trump’s challenge to election certifications in states he lost began to flip Wednesday night after the violence and chaos.

But seeking to remove a president in his final days of office would be a quantum leap of confrontation from lawmakers who have gone along with Trump for nearly four years.

There was also fresh talk Wednesday evening of another avenue for removal: impeachment, this time by Democrats.

Trump was acquitted on two impeachment articles in December, but only Sen. Mitt Romney (R-Utah) voted to convict on an article.

Three House ‘squad’ members called for Trump’s impeachment on Wednesday – and a key Democratic leader didn’t rule out the idea.

“Donald J. Trump should immediately be impeached by the House of Representatives & removed from office by the United States Senate as soon as Congress reconvenes,” tweeted Rep. Ayanna Pressley of Minnesota. “This is dangerous & unacceptable,” she added. (DailyMail)