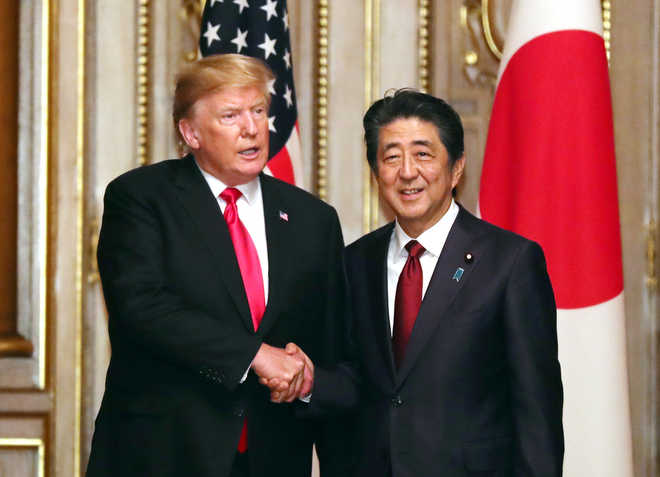 Trump said he was happy with how things were going with North Korea but was however,  in no rush to reach a peace deal.

Trump said at a news conference with Abe after their summit that his goal was to remove trade barriers to put U.S. exports on a fair footing in Japan.

He said he hoped to have more to announce on trade soon and that two of them had agreed to expand cooperation in human space exploration.

“We have an unbelievably large imbalance as you know, trade imbalance with Japan for many, many years, Japan having the big advantage.

“They are brilliant business people, brilliant negotiators and put us in a very tough spot. But I think we will have a deal with Japan,” he added.

Abe, for his part, said the two leaders had agreed to speed up two-way trade talks, but dodged a question about timing.

Trump, who is on a four-day state visit to Japan meant to showcase the alliance between the allies, said on Twitter on Sunday that he expected big moves on trade would wait until after Japan’s upper house election in July.

“Trade-wise, I think we’ll be announcing some things, probably in August, that will be very good for both countries.

“We’ll get the balance of trade, I think, straightened out rapidly,” Trump said at the start of the talks.

Abe, who has developed close ties with Trump since the U.S. leader came to office, stressed the closeness of ties.

“This visit of President Trump and Madame Trump is a golden opportunity to clearly show the unshakable bond to the whole world and inside Japan as well,” Abe told the news conference.

Earlier, Trump was greeted by Emperor Naruhito and his Harvard-educated wife at the imperial palace in Tokyo in a formal welcome ceremony broadcast live on national television.

Trump is the first foreign dignitary to be received by the monarch since the latter inherited the throne after his father, Akihito, stepped down on April 30 in the first abdication by a Japanese emperor in two centuries.

Trump has made clear he was pleased to have the honour of the first reception with the emperor, who is hosting a state dinner for the U.S. leader and his wife.

On Sunday, Trump spent what he said was “an incredible evening” watching the Japanese national sport of sumo, where almost naked wrestlers grapple on a raised sand ring, after he and Abe had bonded over hamburgers and golf. (NAN)