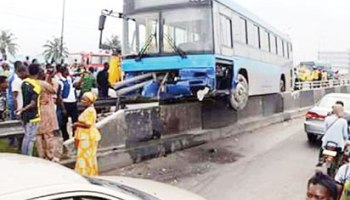 An unidentified lady was, on Tuesday, crushed when a container-laden truck rammed into a BRT Terminal, in Lagos, inward Ogolonto.

The incident, which occurred at about 12.30p.m. in Agric Bus Stop, Ikorodu, caused panic as there were speculations via the social media that many persons were trapped.

However, about 45 minutes after the accident, law enforcement agents arrived at the scene and removed the truck.

Meanwhile, emotions ran high when her remains were being removed by the law enforcement agents and taken to the morgue.

The victim was said to be one of the commuters waiting by the roadside when the truck’s breaks failed and it rammed into the BRT Terminal.