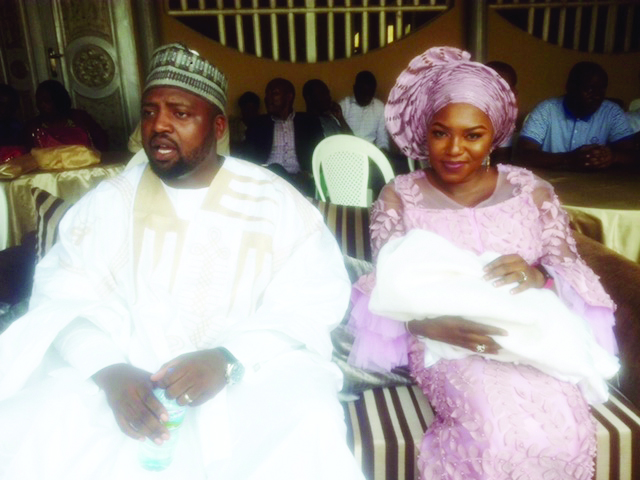 It is generally believed that medical doctors have solutions to every health challenge, including the making of babies. However, for Dr. Azi Nyam of the Jos University Teaching Hospital (JUTH) Jos, Plateau State, the claim seems a mere belief for children truly come from God.

Dr. Nyam, who had been married for the past five years without a child, said the travails of a married couple, who are certified medically fit to produce children but could not give birth to any child for a long period is better imagined. He described such situation, as “living in hell on earth.”

The physician stated this during the naming ceremony of his first daughter, who was born after five agonising years of waiting.

In his testimony, Dr. Nyam, told people, who gathered at the naming ceremony, that his situation was almost becoming an embarrassment, particularly among his peer group, who got married years after him, and already got children.

Strangely, Dr. Nyam revealed that the last pregnancy by his wife, Mrs. Martha Nyam, a journalist of repute, which later produced their first child, was confirmed negative at a reputable medical laboratory by an expert personnel, after the first test, had indicated positive, meaning that his wife was pregnant.

However, following his wife’s insistence that her system was indicating pregnancy symptoms, Dr. Azi instructed her to undergo another clinical pregnancy test in a different medical facility.

The third pregnancy test turned out positive and the man became confused. Nevertheless, he trusted God because even as medical personnel, he believed that only God, not medical observation was solution to his having a child.

Therefore, it was a thing of tremendous joy for Dr. & Mrs. Azi when their daughter eventually arrived. They named the child Amaka-Anya, after Dr. Azi’s late mom, in accordance with the Izere traditions and cultural beliefs, meaning that, his late mother has returned through his daughter.

The clergy, who performed the Christian naming, described Baby Anya, as a special child. He charged the parents, including other relations, to take good care of the child, saying children who are born after a long expectations, and in difficult moments, such as the current insecurity and economic challenge in the country, are special and must be given special attention.

Reading from the bible, the cleric referred to Hebrews chapter 11 verses 23, which talked about faith and how Moses’ parents hid him from enemies for three years.

So, he charged the parents to act in the same way the parents of Moses in the Bible when every male child born at that time was to be eliminated.

Both grandparents of the baby also expressed their earlier worries, as their children could not produce any child after a long time after marriage, even after being certified medically fit.

Dr. Azi’s father said he had concluded that his son might not make him a proud grandfather.

However, his father-in-law reiterated what the clergy had said, noting that the baby is a special child and should be provided with good parental care. He also pledged to assist in bringing up the baby in a suitable way and ensure that she turns out a good citizen among her generation.

A one-time Director of Press Affairs to former governor Jonah David Jang of Plateau State, James Manok, in a goodwill message at the naming ceremony, recalled that he too had a similar challenge, having waited for seven years after marriage before he got his first daughter. He said waiting for a child by couples, particularly in African society can be dehumanising, as people might mock someone.

In spite of the heavy downpour during the naming ceremony, the Anyas’ compound was filled to capacity with well wishers. Guests were treated to a befitting reception with lots to eat and assorted drinks.

Prayers were offered for the child, and for those are seeking for the blessing of the womb.