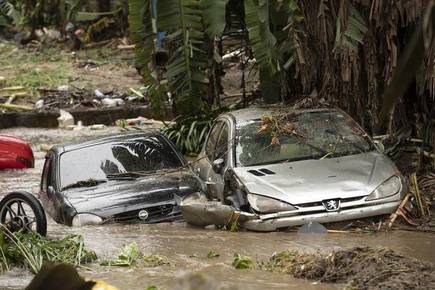 The deaths occurred in the cities of Guaruja, Santos and Sao Vicente of Sao Paulo state, with the former hardest hit, according to a statement from its civil defence office. The office estimates 200 people have been displaced, in Guaruja.

“There is no way to live in this place again,” said Guaruja resident Laercio Fiel da Silva. “Let’s see what will happen to these families that already lost their houses. I don’t know what to say; it’s very difficult, difficult.”

Brazil’s South East region has been hit by heavy rains this year, causing recurrent floods and landslides. The worst instance came in January, when dozens perished in landslides in the interior state of Minas Gerais.

Some parts of Rio de Janeiro were flooded on Sunday and Monday, and several people died, according to local firefighters. Further, state authorities said more than 5,000 people had been forced from their homes.

Residents are growing frustrated, and one threw mud at Rio Mayor Marcelo Crivella’s head as he spoke to reporters, on Monday.

Moderate to strong rain was expected to continue Tuesday along Sao Paulo’s coast, according to the civil defence office. (HindustanTimes)