Though I fought to have Peter Obi reinstated when he was impeached as Anambra gov, but I won’t collaborate with him in 2023 – Sowore 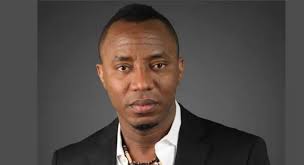 Mr. Sowore, who also said he would never collaborate with PDP, APC or any of the appendages, said people have different ideologies and convictions.

Sowore recalled that he fought for Mr. Obi to ensure he was reinstated as the Governor of Anambra State when he was impeached in 2006, but he maintained that he would collaborate with him this time round.

In the words of Sowore, “If you go to my timeline, they say, why don’t you join Peter Obi? I want to push it out for those of you who say this and address it. I’m not new to Peter Obi.

“When Peter Obi was kicked out of power in Anambra by Andy Uba, I think around (2006), I fought to ensure that he regained his position back.

“Andy Uba spent 17 days as Governor of the state and the position was reverted back to Peter Obi. I didn’t know Peter Obi then. I never met him.”

Mr. Sowore said he finally had the opportunity to meet Mr. Obi with an associate and the former  governor said publicly that, ‘this is the guy that helped me regain my seat’.

He said Mr. Obi called him in 2019 when he was Atiku’s running mate and asked if he would like to work with them. He said he declined and told him he would never work for PDP or anybody associated with PDP.

He said because people have different ideologies and convictions which they have maintained after 30 years, they cannot be modified and pushed in the direction of a particular candidate. He said he understands people are free to say this is the person they want to follow.