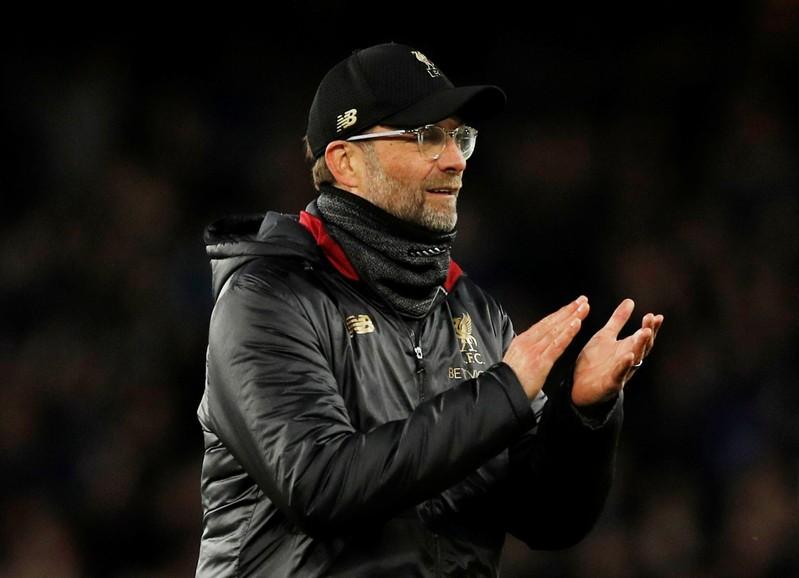 Liverpool manager Jurgen Klopp dismissed criticism of his tactics and substitutions in Sunday’s 0-0 draw with Everton in the Merseyside derby in a tetchy exchange with a reporter in the post-match news conference.
Liverpool’s fourth draw in their last six Premier League games saw them knocked off the top and leaves them a point behind leaders Manchester City with nine games remaining.
Klopp took off striker Sadio Mane for midfielder Adam Lallana in the 84th minute and when asked if the series of draws indicated he should take more risks, the German bridled.
“I’m really disappointed about your question. It’s football — we don’t play Playstation,” he said.
“Do you think we didn’t take enough risks today? Was there any draw where we didn’t try to win? Bring on an extra attacker and football changes? It is not like that, come on.

“We are offensive enough, football doesn’t work like that. There are nine games to go and we don’t lose our nerves, not like you, obviously.”
When the reporter suggested he might have brought on another attacker, Klopp said it was not the right moment to take a cavalier approach.
“You cannot start with four or five strikers in a striker way with nothing else to do than to try to score.
“We are an offensive team and that’s absolutely okay. We take a risk, no doubt about it, but it is not like that. It’s not the moment where we say, ‘Come on now, throw everything in that direction.’
“You cannot play in the Premier League like that. We play next week against Burnley and if we play only offensive, they will kill us on the counter-attack, 100 per cent.
“We take all the risks, but you cannot take more than 100 per cent risk. It’s not about going nuts.”

Klopp also told the BBC he was unconcerned by the current league table, in spite of his side having given up a seven-point lead.
“I’m completely fine with chasing. Who wants to be top of the table at the beginning of March? It is nice but there are lots of games to play,” he said.
“I watched Match of the Day last night and saw the celebrations of Man City. They had 900 chances and scored one goal, a shot with the wrong foot. You have to be ready for these chances.”
Liverpool have not won an English league title since 1990, and none in the Premier League era, but Klopp said he was still convinced they could end that wait this season.
“I believe 100 per cent in our chance. Game by game by game, my feeling gets better about the boys because they look really ready for it.
“We didn’t score, that happens. It was a difficult game. It was just a fight and we were ready for that fight. Now we have a point more than before. All good”. (NAN)