The inevitability of the Buhari victory 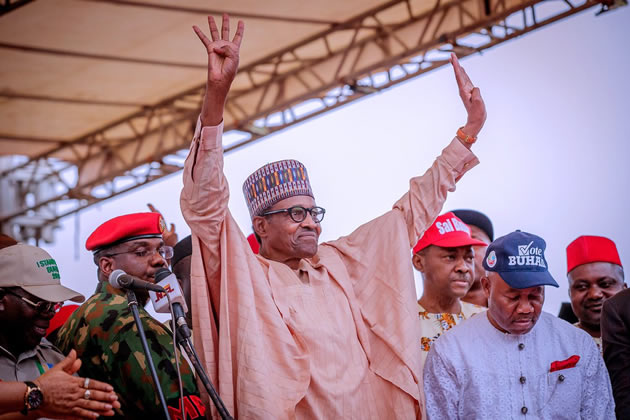 With barely three weeks to the 2019 general elections, the bookmakers are getting even more certain on how the elections will go.

In times past, it would have seemed a certainty that the incumbent would always be returned. But that is no longer a done deal. Former President Goodluck Jonathan set that pace. President Muhammadu Buhari understands that he has to struggle and not rest on his oars, to get re-elected.

But even at that, the fog of uncertainty, which had shrouded the outcome of the February 16 election is getting clearer and clearer by the day.

Yes, with the advent of the Atiku Abubakar challenge, the race for Aso Rock has become a veritable keen one, yet it is strongly believed that the odds will favour the incumbent president.

However, a few like Oby Ezekwesili, Kingsley Moghalu and, perhaps, Fela Durotoye, have made appreciable public appearances to register their candidature. However, before last week ended, the duo of Durotoye and Moghalu have suddenly realized that they cannot do the battle all alone, and so decided to combine their capacity in a new name called FORCE. How much power and electoral influence will  be resident in that Force will be tested February 16.

READ ALSO: CJN: Why Tanko must go, by Olisa Agbakoba

Almost all others are merely fulfilling nominal records. Even then, the stock of opposition depleted last Thursday when Mrs. Oby Ezekwesili, one of the vocal women in the race on the platform of Allied Congress Party of Nigeria (ACPN) suddenly pulled out of the presidential contest, with many suggesting that all she wanted was to have it on her CV that she once ran for the Nigerian presidency.

Besides the two dominant political parties – the All Progressives Congress (APC) and Peoples Democratic Party (PDP), many Nigerians are not at home with the remaining parties and whatever their names or symbols are.

So, in a sense, the presidential election is largely between Buhari and Atiku.

Both men are in their 70’s. Both men are from the same Hausa-Fulani stock. Both men are Muslims. Yet, they are the candidates every attention is directed. That shows that the issues to be considered in the election are not so much about region or religion, because even those who offer an alternative from the duo are least in contention. They only serve to thicken the brew of democratic contest.

It is remarkable that the PDP, which had held power for 16 years, when democracy returned in 1999, is angling hard to regain power at the centre.

The theme of its campaign is “Making Nigeria work Again”. This suggests that Nigeria once worked and only stopped working in the nearly four years of APC’s rule.

They seem to suggest that the less than four years rule of the APC is what ruined Nigeria and they are now poised to regain power so as to take Nigeria back to its functional state.

The APC on the other hand had strongly argued that the 16 years of the PDP was not only philistinic but also ruinous. And that it has indeed applied every good skill and intent to rescue the ship of state from total wreckage. Indeed, the ruling party blames the slip into recession suffered by the country in 2017 on the reckless after-effect of the PDP government, and that it (APC) should be hailed for so quickly managing Nigeria out of the recession.

Understandably, the arguments have been back and forth. However, it is significant to note that sometime last year, the National Chairman of the PDP, Chief Uche Secondus, had openly admitted the misrule of his party, the PDP, and followed it with apology and plea for forgiveness from the Nigerian public.

It was a mark of a contrite spirit. It is remarkable that the then spokesman of the APC, Mallam Bolaji Abdullahi, who is now a PDP chieftain, had remarked, in his response to the apology, that “even if Nigerians are gracious enough to forgive the PDP its years of misrule, they will not forget in a hurry”.

It is, therefore, preposterous for the PDP to now sell the impression that it is on a rescue mission, whereas the PDP it was that attempted to drown the country in the first place.

I didn’t bribe lawmakers to impeach my deputy –…

Indeed, it was the degree of angst Nigerians had for the PDP government that led to the rejection of the party at the polls in 2015.

In a way, the Nigerian public was thus looking for a messiah with the near magic wand that can wipe away the years of bitterness, misery and misgovernance and enthrone  a perfect state, or a semblance of it.

But because it is easier to destroy than to build, the Nigerian public soon lost patience with the Buhari administration, as instead of things getting automatically better, there was a long drag and near state of inertia on many fronts.

And that is why some Nigerians seem to have lost faith in the capacity of the present government to turn the country around. However, those who are more perceptive believe that the building blocks for the recovery of the Nigerian economy has begun., while believing that if the recovery process is interrupted again, then the nation’s journey to recovery will be reversed and probably taken back to point origin.

One major factor that has buoyed the candidacy and chances of President Buhari is the enduring belief that he is incorruptible. Whether it is a myth or not, many Nigerians, including even Buhari’s critics know is that he is corruption-free, although some persons around him may not be so described.

That belief, plus his political persona has made him immeasurably popular in many parts of the country, especially the northern part. There is a general anger by majority of Nigerians against the phenomenon of corruption and its perpetrators. That is why many believe that Buhari’s determination to battle the corrupt people in the society is an agenda that resonates well with loud acclaim across the country. Many people even believe that those driving the opposition against Buhari are the handful of elite, who have been stymied in their operations by the policies and programmes of the Buhari administration. They are no longer able to have their way as it used to be and so in frustration they rise up against Buhari.

Any discerning observer of the Nigerian politics would see most clearly the inevitability of Buhari’s victory.

Talk about the overflowing crowd at his rallies and you would understand the veneration Buhari enjoys across the country. The swathe of party supporters during his campaign rallies bespeaks of the massive support base he enjoys.

What is more, the INEC statistics shows that the highest voting demography in the country is the North-west with a total of 18,505, 984 voters, while the least is from the South-east with 8,293,093 voters.

With the South-west, a major stronghold of the APC, having the second largest voting population, the APC chances of overall victory are even brighter than a million stars.

The calculation among political bookmakers is that the APC will win overwhelmingly in the North-west, South-west and make huge impact in the North-east, and split the votes significantly in the North -central, South-east and then South-south zones. The President is from the North west region of the country. The expectation that the South-east will be swept by the PDP by the twin reason of the Peter Obi factor, plus the fact that region does not actually trust Mr. Buhari,  has been shaken. The fact that Anambra State and its government has distanced itself from the wholesome adoption of Atiku and the PDP is instructive in interpreting the voting pattern of the region.

Besides coming from the region with the highest voting population, it is remarkable that the gale of defections into the APC in recent times has been rather astounding. Yes, some have also defected from the ruling party into the rival PDP and other parties, yet, on the balance of scale, the APC has witnessed far more influx of members than any other party in the country.

Yes, the economy has been unfriendly, yet, many Nigerians are impressed with the effort being made by the Buhari administration to revamp infrastructure across the country. The number of farmers artisans, market men and women, who received huge breathers in their various ventures and businesses see Buhari as a redeemer to whom they would be eternally loyal. This is not to mention the many beneficiaries of the N-Power scheme, the school feeding scheme and even the social network to the very poor in the society.

There is virtually no state in the country where Federal Government project is not going on or already completed.

What is more, the huge project of connecting every state capital by rail in the country is a mega niche that creates a wide appeal for Buhari. Already, the Lagos – Ibadan rail, as well as Warri – Itakpe rail lines are operational and it is a major milestone for Buhari.

Unfortunately for the opposition, the other 78 political parties, contesting the presidency are generally considered unserious and flighty in their weight, except the PDP.

In one week, three political parties have reviewed their participation in the polls. While ACPN pulled out completely, pledging instead to support President Buhari’s APC, the Young Peoples Party (YPP) and Alliance for New Nigeria (ANN) have decided to merge their forces, to form FORCE, so it can attack the status quo with greater punch. Mrs. Ezekwesili had similarly claimed that she was pulling out of the presidential race so she could combine forces with others to chase the APC and the PDP out of the Nigerian political space, in what appears like a pipe dream.

All said, despite all the oddities , real or perceived, around the Buhari candidacy, all seems set to return him to power. February 16, is the eagerly awaited judgement day.

CJN: Why Tanko must go, by Olisa Agbakoba

Presidency: Igbo’ll wait another 25 yrs if they get it wrong in 2019 – Ojukwu