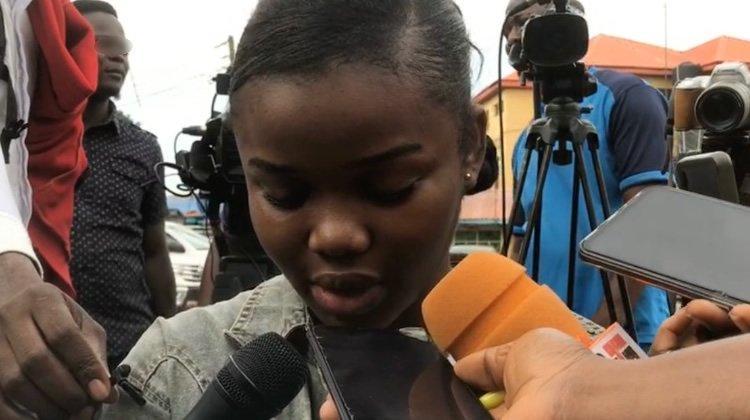 It is no more news that SuperTV boss, 49-year-old Michael Usifo Ataga, has been gruesomely murdered in cold blood.

What is intriguing is that a 21-year-old University of Lagos undergraduate is now in police net for allegedly stabbing the man to death at a Short Service Apartment, situated at 19, Adewale Oshin Street, Lekki, Phase 1, Lagos, following disagreement over one more round of sex.

The suspect, identified as Chidimma Adaora Ojukwu, is a 300 level Mass Communication student. She was paraded by the Lagos State Commissioner of Police (CP), Hakeem Odumosu, at the command headquarters Ikeja, nine days after Atage was murdered.

The CP said Ojukwu was arrested at her parent’s residence in Yaba, following painstaking investigation after Ataga was reported missing by his family.

The suspects told reporters in an interview that she was introduced to Ataga four months ago and that they used to meet at his residence in Victoria Garden City (VGC).

She said: “We used to meet at his residence in VGC but that day, he said he was doing maintenance in the house and opted that we meet at an apartment.

“I went online to search for the apartment and went there to do physical inspection. I got to the hotel around 6pm and he came about an hour.

“We were having fun; drinking, smoking and taking drugs. On Monday, we were together, drinking and smoking. We smoked SK and Loud. We had fun and so I went to get food for both of us and then on Tuesday, he was trying to make advances which I told him I was tired. I was already sleepy then he became violent on me and he got his way which I let him.

“Then towards afternoon, we ordered for smoke and I wasn’t happy with the first one that he did so I was still on my own just smoking and drinking with my food. He too was on his own on the couch so he came onto me while we were both watching movie and I told him I was not happy with what he did. I told him he didn’t help me or assist in anything but yet he keeps playing me around and then he gave me his ATM card to go and withdraw whatever I want and told me his pin.

“I was like that’s not what I meant so he became violent trying to get to me and I was resisting and defending myself and at some point he hit my head on the wall I was struggling to go out but he was stopping me. He even locked the door and he was with the key. I didn’t know where he kept it, so when I get the door he would draw me back and I also retaliated.

“At some point, he was choking me while I was on the kitchen cabinet and then I stretched out to the knife and stabbed his neck twice, when I stabbed him I threw the knife on the bed then he was going for it while I went for it as well. I laid on the bed, that’s when he came on me to hold the knife and I managed to stab him in the stomach.

“When he dragged the knife, he managed to slice my hand and as he was holding it, the knife broke so it slipped from his hand but he was weak and he fell on the floor. While he was lying there, I changed, I looked for the key where he hid and I left the room.”

Ojukwu confessed to withdrawing about N380, 000 from Ataga’s account before she was arrested.

According to Odumosu, a Nigerian International Passport with No.B50010434, a driver’s licence, complimentary cards, bank account statement, were recovered from the suspect.

“A case of murder was transferred from Maroko Division to the State Criminal Investigation Department, Panti Yaba, for discreet investigation. The fact of the case is that, on June 15, at about 5pm, one Chidimma Adaora Ojukwu, a 300 level, undergraduate of the University of Lagos, Conspired with others, now at Large, allegedly murdered one Michael Usifo Ataga, 50, by stabbing him several times with a sharp object,” the CP said.

“The prime suspect, Chidinma, who had earlier booked for the apartment on June 13, secretly, left the apartment after the deed had been done on June 15, around 5:30pm. The suspect was tracked and arrested in her residence at 57, Akinwunmi Street, Alagomeji, Yaba-Lagos.

“During search, the prime suspect and Mass Communication Student of the University of Lagos,was caught with a blood-soaked cloth, ostensibly worn on the day of the incident. The suspect confessed to have stabbed the deceased with a kitchen knife after a struggle.

“She further confessed to have taken the knife away while leaving the scene and disposed same in a dust bin at her residence. It has also been revealed that the suspect equally stole the deceased iPhone. The investigation is ongoing to arrest other accomplices. However, the case will be charged to court as soon as investigation is concluded.”

FROM THE INSIDE: NGIGE’S SERMON ON THE MOUNT