Since August 15, 2021, when the Taliban, the counterpart of Nigeria’s homegrown Boko Haram militants, took power in faraway Afghanistan, it would seem most Nigerians have, outside of the now showing Big Brother Naija reality show, found another source of distraction from the hard truth staring at their country.

Afghanistanism, so to speak, has become the order of the day. And just in case you are wondering what that means, Afghanistanism, and coincidentally in this instance, is the practice, mostly by journalists, of concentrating on problems in distant parts of the world and thus evading controversial domestic issues of topical importance.

Afghanistanism serves APC right, as it’s government led by President Muhammadu Buhari, over the past six years-plus, has gone down as one of the most disappointing in our history as a nation.

Following the news break mid-August that the Taliban fighters had entered the Afghan capital Kabul and had hijacked power, it would seem that netizens in Nigeria also ‘hijacked’ the Afghan headache and have been drinking APC tabs to no end.

With so much energy they hardly apply to similar incidents and forces that have combined to bring Nigeria to her knees, they have since been on the streets, figuratively, digesting and analyzing the Afghan development with so much force.

Some of the loudest are mostly those, who for personal and political sentiments/reasons, have been keeping quiet, or as a matter of fact, are tacitly and openly endorsing the many and similar evils going on in the country. It is indeed a classical case of one not first removing the beam out of one’s eye in order to see clearly to remove the speck in another’s eye.

That, obviously, is hypocrisy by another name. I daresay, however, that the position here does not in any way mean taking sides with the tragic development in Afghanistan.

A recap of the Afghan incident shows that as soon as the Taliban fighters entered Kabul, President Mohammad Ashraf Ghani was forced to flee the seat of power, saying, just like our own GEJ in 2015, that he wanted to avoid bloodshed. The development, which signaled the end of a 20-year Western experiment aimed at remaking Afghanistan, saw Taliban fan out across the capital on that dark day in history, to take control of the presidential palace.

This is in addition to the claim that they also had taken control of most of the districts around the outskirts of the capital.

Reports and pictures all over the international media showed a city gripped by panic, with helicopters racing overhead throughout the day to evacuate personnel from the US embassy. Smoke was reportedly seen rising near the compound as staff were said to have destroyed important documents.

The American flag was lowered just as several other Western missions also prepared to pull their people out of the country. In fact, our PMB was even reported to have said  that with the US pullout from Afghanistan and the subsequent takeover of power by the Taliban, Africa has automatically become the new frontline of terror and global militancy. 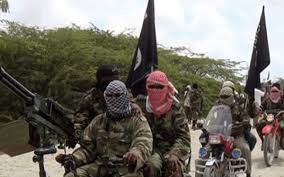 Buhari, in an article published in the Financial Times of London that Sunday, argued that for Africa to defeat the growing terrorism on its soil, it would require more than US military aid but the entire world coming together for its sake.

He wrote, among other things, “Though some believe the war on terror winds down with the US departure from Afghanistan, the threat it was supposed to address burns fiercely on my continent. Africa is the new frontline of global militancy. Yet, few expect the outlay expended here to be as great as in Afghanistan. The fight against terrorism, begun under the George W. Bush administration, was never truly global.”

Nonetheless, Afghans, fearing that the Taliban could re-impose the kind of brutal rule they are known for, rushed to leave the country. The sight at the airport was heartbreaking.

President Ghani, whose whereabouts was unknown after fleeing the country, was later said to have been received by the United Arab Emirates “on humanitarian grounds.”

Interestingly, those whose president is hardly ever known to be with them either in spirit, truth or physically, began to jump all over the space about a fleeing president. Haba!

Now, here is my point: At the same time Nigerians were engrossed in analyzing development in Afghanistan, bandits, who are not much different from the Taliban, were in what is gradually becoming part of the system, abducting school children and others for ransom.

In this particular case, which I will use as an example of what sadly is beginning to look like a norm, the gunmen had stormed the College of Agriculture & Animal Science, Bakura, Zamfara State, by 11 pm on August 15, kidnapping students and staff of the institution.

Altogether 20 people were reportedly abducted, including 15 students, four staff, and a driver. During the attack, two watchmen and a police officer were reportedly killed by the gunmen. The abductors, as has become the case, were boldly demanding N350 million as ransom for release of their victims.

This is just one out of the many evils Nigerians are now living and dealing with. Almost on a daily basis, the abduction of school children are reported. As I write, many are still held. Some others never lived to tell the story.

From Chibok in Borno State to Chikun in Kaduna State to elsewhere in Katsina and Niger, among other states, one criminal case of abduction of students or the other has become the order of the day. Traveling on the highways is now like a journey to Golgotha, with road users’ hearts in their mouths until they reach their destinations as armed bandits and other criminal elements station themselves to abduct, rob, and sometimes snuff the life out of the innocent travellers.

It is indeed sad that in Africa’s most populous country, kidnapping for ransom along highways, and from homes and businesses now make almost daily newspaper headlines.

In fact, mass abductions have soared this year, with almost 1,000 students kidnapped, according to UNICEF. Most are released after negotiations but many are still being held in forest hideouts, while others are slain.

That is just the tip of the iceberg, considering the near-complete breakdown of law and order, criminal activities, and bloodshed going on in Nigeria today. Yet, the government appears to be more interested in cattle rustling and grazing routes.  While you may hardly get to hear of any criminals apprehended for the maimings, killings, arson, and looting of communities, thereby displacing many Nigerians in their own country, the president instead, shows more interest in grazing routes and encroachment of such routes in the 21st century.

The criminal elements are hardly dealt with “in the language they understand.” Rather than explore modern ways of breeding cattle via ranching, the federal government does not hide the fact that it is all for open grazing, which clearly, is a major factor in the high level of Nigeria’s insecurity.

Last week and with great dispatch, PMB approved recommendations of a committee to review 368 grazing sites across 25 states in the country. The directive,  according to him, was “to determine the levels of encroachment… and bring more understanding on the grazing reserves, and implementation.”

Terms of reference of the committee include: to collate from states and confirm the status of all grazing reserves, assess the percentage of available land and those with existing encroachment complications for case-by-case resolution in partnership with state governments and the Federal Capital Territory.”

Let me recall a viral video showing a loose cow running wild in the middle of the Third Mainland Bridge, Lagos, some weeks ago. If you are familiar with this bridge, you can imagine how dangerous it could have been for any one on that bridge at the time. Could it be that the bridge, built over the Lagos Lagoon, also encroached on a grazing route? Your guess is as good as mine.

Anyway, the committee on grazing routes, sites, and sundry matters, according to a presidential aide, Garba Shehu, will also ‘make recommendations for gazetting of ungazetted reserves and create a database of national cattle herders and ensure that grazing reserves are well communicated to all stakeholders.’

What further evidence do you need to know that in Nigeria, the life of the citizens do not matter as much as that of cows? What a Wawu!

This may well explain why Nigerians do not have as much energy to channel into addressing issues bordering on their immediate environment as they would on things like the Taliban takeover in Kabul, an incident someone actually said had taken place in Nigeria long ago.

This is even more so when you consider that the few that occasionally and courageously exhibit such energy are merely wasting their time making “inconsequential attempts to de-market their president, or so says Minister Lai Mohammed.

I just indulged my knack for Afghanistanism.