Tale of one Cameroonian and a Sudanese

You are from Cameroon and not qualified to contest for office of president of Nigeria, Muhammadu Buhari and his All Progressives Congress (APC) tell Alhaji Atiku Abubakar of the Peoples Democratic Party (PDP), who would fire back at Buhari thus: ‘You are from Sudan and shouldn’t be overseeing over affairs of Nigerians.

Does this sound funny? Very indeed, if you ask me! But it is a serious matter. Seems like the way we roll in Nigeria, which is one huge joke. If you are still in doubt, let’s do a recap of this particular comedy, or tragedy, or better still, the tragicomedy that is just one of many of our national way of life.

And don’t forget that Alhaji Atiku Abubakar was the major challenger to incumbent President Buhari in the just concluded 2019 presidential election that had Buhari declared winner for another term of four years by the Independent National Election Commission (INEC).

So, sit back, relax and savour the tragic, comic or tragicomic episode.

The APC, in faulting the grounds of petition filed before the Presidential Election Petition Tribunal by the PDP and its presidential candidate, Alhaji Atiku Abubakar, has argued that the petitioner (Alhaji Atiku) is a Cameroonian and “not a citizen of Nigeria by birth. Therefore, he ought not to have even been allowed in the first place to contest the election.

Can we then say Warsaw saw war and war saw Warsaw? Anyway, although Atiku was vice president of Nigeria from 1999 to 2007, the APC in questioning his citizenship, also faulted claims by him and his PDP that they obtained the authentic results of the February 23, 2019 presidential election from INEC server showing that they won the election.

Let’s just say that is not the taste of the pudding. The main gist now that the duo have ended the election battle on the field and now at the tribunal is in the argument that Atiku is not a Nigerian by birth and thus, not qualified to contest for president.

And here is APC’s argument: “From available records” Atiku “was born on November 26, 1946, in Jada, Adamawa, in Northern Cameroon and was therefore a citizen of Cameroon.”

Prior to 1919, Cameroon was administered by Germany but following the defeat of Germany in World War I, which ended in 1918, Cameroon became a League of Nations mandate territory, which was split into French Cameroons and British Cameroons in 1919. The British Cameroons was said to be administering from neighbouring Nigeria, our Nigeria!

And following a plebiscite held in 1961, Northern Cameroon, which included Adamawa, preferred a union with Nigeria, while Southern Cameroon chose alignment with the mother country.

“The transition took place on June 1, 1961 and as a result of that plebiscite, Northern Cameroon, which included Adamawa, became a part of Nigeria and by derivation, the 1st petitioner (Atiku) became a citizen of Nigeria but not by birth.”

Therefore, “Atiku had no right to be voted for as a candidate in the election to the office of the President of the Federal Republic of Nigeria held on February 23, 2019 across Nigeria,” APC argued, adding that “all votes purportedly cast” for Atiku in the election as declared by INEC, “are wasted votes.”

As would be expected, PDP has described the argument as a woeful design to overburden, distract and bog down the presidential election petition tribunal with trivialities, lies and falsehood, so as to derail the course of justice.

As a matter of fact, the opposition party in a statement by its National Publicity Secretary, Kola Ologbondiyan, said it’s even more worrisome that Atiku’s citizenship “was being disputed by individuals whose ancestry had always been a subject of debate,” adding that such diversionary tactic has only helped to further expose that APC has no answers to the plethora of presentations by it before the tribunal that Atiku won the election.

“Whereas Atiku Abubakar’s citizenship by birth, even under our constitution, cannot be contested, it is indeed the biggest irony of the year that Atiku’s citizenship is being disputed by individuals, whose ancestry has always been a subject of debate,” PDP said.

It added, “These individuals include those who, being not sure of their origins, have no love for Nigeria and even refused to be on the side of our nation at the 1985 summit of the defunct Organisation of Africa Unity in Addis Ababa.”

Such persons, according to the PDP, prefer to deploy national resources for infrastructural development in affiliated places outside the shores of Nigeria, when the country is in dire need of attention.

In summary, PDP believes APC claim, in response to alleged rigging of the February 2019 election, simply explains why the APC-led federal government has allegedly remained insensitive to the challenges of insurgency, general insecurity and economic travails of Nigerians in the North East, particularly in Adamawa, Yobe, Borno and Taraba states.

And I say, what a pity, what a country! This is where we are at a time other nations are talking of all manner of technology. So, why on earth do you think nothing is working in Nigeria?

How does the argument that Atiku Abubakar is from Cameroon or that Buhari is from Sudan help the ordinary person on the street after what must have been one of the most expensive and bloody elections in history?

How will that address the hardship in the land where most Nigerians can barely survive with some now committing suicide out of frustration?

Nigeria is practically in darkness, with the promise of improved power supply a mirage, leading to most organizations closing down and foreign investors leaving the country in droves. Shame no one is talking about that.

How is this Cameroon – Sudan narrative going to address the issue of a looming fuel crisis with all its attendant hardship?

Notwithstanding that the Nigerian National Petroleum Corporation (NNPC) as well as the federal government have denied rumor of subsidy removal on prices of petroleum products, if you’ve been around for some time in the country and know how government often says one thing only to do the other, it may not be long before the people are once again hit by the pains of hike in prices of petroleum products.

This will mean tougher times for a people already on the ground and battered by a distressed economy. 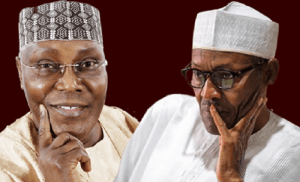 Considering that the International Monetary Fund (IMF) at the just concluded joint annual spring meetings with the World Bank in Washington DC, advised the Nigerian government to remove fuel subsidy and direct the money to the provision of social amenities for the country, it is only a matter of time for a government that is already toying with the idea of increased value added tax to add this to its chain of policies that hurt rather than improve lives of Nigerians that have no access to public funds.

Christine Lagarde, Managing Director of IMF, who gave the advice during a press conference, said with the low revenue the country is generating, removal of fuel subsidy would enable it have enough funds to provide the social needs of the people.

Among other things, she said if that was to happen, there would be more public spending available to build hospitals, to build roads, to build schools, and to support education and health for the people. But most Nigerians who have hardly felt the impact of continuous borrowing by government would not agree with her.

What they rather see and what actually has been in practice is continuous looting of any public funds by those that are supposed to account for them.

And so, because of this IMF position, or expression of its position, knowing that such institutions as IMF actually direct the economic path of Nigeria, oil marketers in the country last week, took the usual route of creating artificial scarcity.

Long queues returned to the filling stations across the country with dealers hoarding the product and extorting money from consumers before they could sell to them. In some stations, they came up with the idea of rationing the product.

For instance, some stations were insisting on selling only N3, 000 worth of the product to every car. According to them, it was a directive of the Department of Petroleum Resources (DPR) so that the ‘artificially scarce’ product could get to as many people as possible. Lies!

That is how wicked the system is, generally. Everyone wants to exploit the next person, most times in connivance with those in authority.

But back to the point raised by the IMF, which is just like a typical businessman or woman talking. Nigeria has borrowed heavily from such financial institution, which obviously wants the loans paid with interests. And there is nothing wrong with their argument.

Problem, however, is on how the money borrowed was used. Nigerians should be worried if huge loans are being borrowed from financial institutions like the IMF and yet, almost all infrastructures are in a state of total decay. There are hardly good roads, schools, hospitals, power supply, water supply, etc.

Almost every public institution you can think about in the country is run down. What you have is a near collapsed system, meaning our leaders mortgage the future of the country when money borrowed ends up in private pockets, as is mostly the case since there is hardly much to show for it.

So, the question of Cameroon and Sudan, initially bandied by Nnamdi Kanu, leader of the separatist organization, Indigenous People of Biafra (IPOB), should not distract from asking the real question, which is: Why are Nigerians being impoverished per second?