Suspects who murdered, stole over 150 motorcycles in Lagos arrested 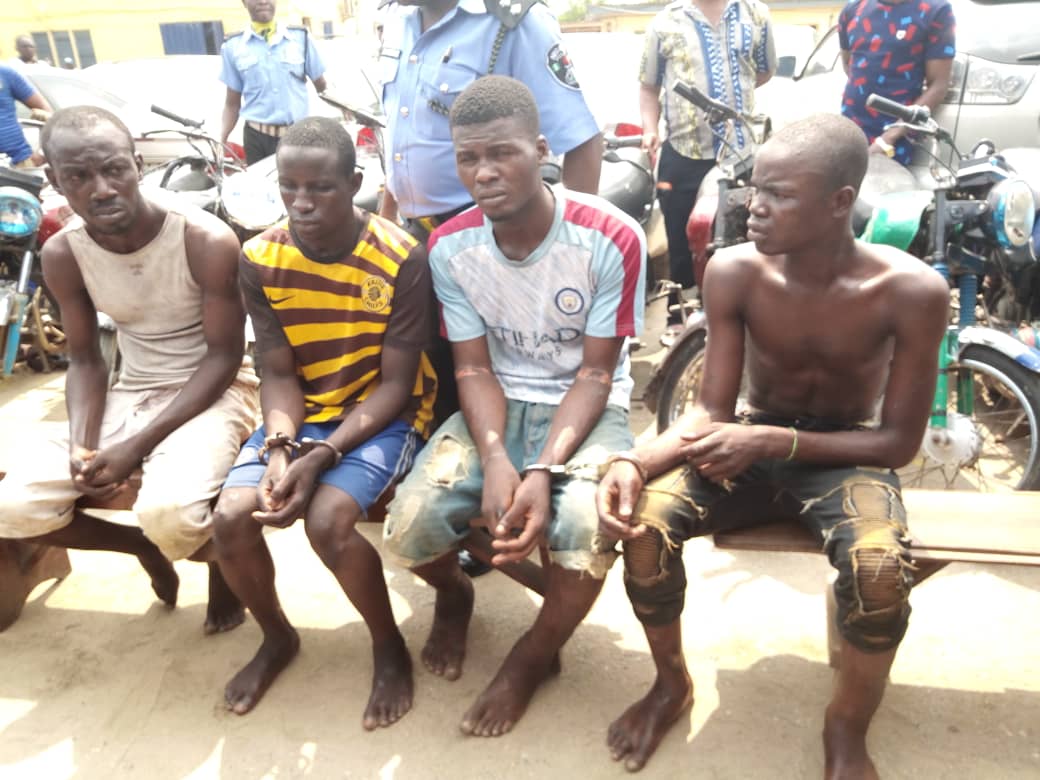 Five robbery suspects, who specialise in snatching motorcycles, dispossessing members of the public of their valuables have been arrested by the Police in Lagos.

The suspects who were alleged to have stabbed a security guard identified as Alayiwa to death, had also reportedly killed one Ibrahim Akinbumi, a resident of Adewumi Adebisi Street, Agege Lagos.

The suspects whose identities were given as Damilare Adegbayibi, Ojesola Osundairo, Basiru Suleiman, Rask Osunmade, and Haruna Ibrahim confessed to have stolen over 150 motorcycles.

According to the Lagos Commissioner of Police, CP Imohimi Edgal, three cut-to-size locally-made guns with 10  live cartridges were recovered from the suspects.

While parading the suspects, on Thursday, at the Police command Headquarters, in Ikeja,  CP Edgal said,  “On January 26, 2019, at about 1 am, information was received from members of the public, that some armed robbers were having a field day along Adewumi Adebisi Street, Agege Lagos, robbing unsuspecting victims of their valuables.

“Based on the information, a combined team of operatives from Dopemu Police Station and SARS Ikeja, swiftly mobilized to the scene.

“On sighting the operatives, the robbers ran in different directions to avoid being arrested; but they were chased, leading to the arrest of one Damilare Adegbayibi and the recovery of a cut-to-size locally-made single barrel gun with four un-expended cartridges from him.

“On closer examination of the robbery scene, two lifeless bodies were found on the ground. Further enquiry revealed that they were stabbed to death.

“The victims were later identified as Alayiwa, surname unknown, a security personnel attached to the street and one Ibrahim Akinbumi, a resident of Adewumi Adebisi Street, Agege Lagos.

“The suspect later led the operatives to arrest four other members of the gang namely: Ojesola Osundairo, Basiru Suleiman, Rask Osunmade and Haruna Ibrahim from whom two additional cut to size locally made guns with six live cartridges were recovered.

“It was discovered that the robbers, apart from robbing unsuspecting members of the public of their valuables, also specialized in stealing motorcycles around Agege, Dopemu and other parts of Lagos.”

Edgal said the suspects had also revealed that they sell the stolen motorcycles to their receiver, one Ibrahim Haruna. “ They have sold over 150 motorcycles to Haruna out of which 11 have been recovered.”

He further stated that Investigation was ongoing at the end of which suspects will be charged to court.