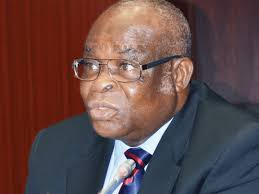 A suit filed by the Cross River State Government challenging the suspension and trial of former Chief Justice of Nigeria (CJN), Justice Walter Onnoghen, has been dismissed by the Supreme Court for being incompetent.

Justice Odili granted all the reliefs sought by the Plaintiff after holding that it has the locus standi to institute the action.

According to Justice Odilli, the Code of Conduct Tribunal (CCT) lacks the jurisdiction to adjudicate on the criminal charge against Onnoghen.

She said the matter should have been handled by the National Judicial Council (NJC) first as in Nganjiwa vs Federal Republic of Nigeria (2017).

Counsel to Onnoghen, condemned the ruling of the Code of Conduct Tribunal (CCT) on the case of false asset declaration by his client.

Okon Nkanu Efut (SAN), on Thursday, April 18, said the CCT’s judgement on the matter was a “complete erosion of fundamental human right to fair hearing”.

Efut said even before hearing from Onnoghen, he was removed as the CJN so easily and speedily without reference to the National Judicial Council (NJC) and the Senate.

He said, “This is not right; it cannot be right. It is unconstitutional.”