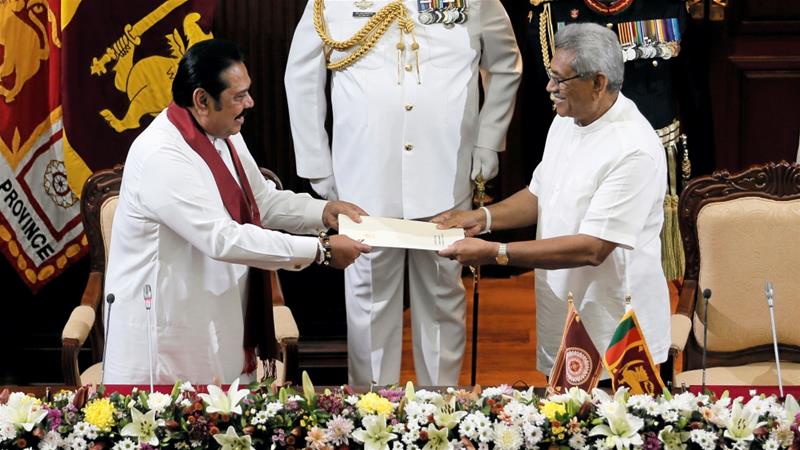 The appointment of Mahinda Rajapaksa, 74, came hours after the former Prime Minister Ranil Wickremesinghe tendered his resignation following the defeat of his United National Party’s (UNP) candidate in the presidential election over the weekend.

It is the first time in Sri Lankan history that two siblings have held the two top political positions, although Mahinda is only in charge of a caretaker government until parliamentary elections next year.

“I wish to congratulate and extend my warmest wishes to Hon Mahinda Rajapaksa, Prime Minister of the Democratic, Socialist Republic of Sri Lanka,” Gotabaya Rajapaksa tweeted after the swearing in ceremony.

Gotabaya, 70, had earlier served as defence secretary under his brother Mahinda, who himself served as president from 2005-2015.

Mahinda Rajapaksa, who had been Sri Lanka ‘s opposition leader since January, has held the prime minister’s post twice before. He is set to be the Sri Lanka Podujana Peramuna (SLPP) party’s candidate in the parliamentary election expected around April.

Al Jazeera’s Minelle Fernandez, reporting from Colombo, said the vision of the two brothers put the national security and economy a priority.

“They say they want to make Sri Lankans to feel safe again following the Easter Bombings. And they want to deal with the shortcoming of the economy,” she said.

The April bombings that killed more than 260 people was blamed on a local Muslim group. The Islamic State of Iraq and the Levant (ISIL or ISIS) armed group also claimed responsibility for the deadliest attacks since the end of civil war in 2009.

Gotabaya Rajapaksa as defence secretary under his brother Mahinda was credited with military victory ending the 27-year civil war against separatist Tamil Tigers.

The brothers are considered heroes among Sri Lanka’s Sinhalese majority and the powerful Buddhist clergy, but Gotabaya has been accused of war crimes in connection with the alleged killing of around 40,000 Tamil civilians in the final stages of the conflict.

Rights groups have long called for investigations into alleged rights abuses committed during the Rajapaksas’ previous terms in power.

Meanwhile, corruption charges against President Gotabaya Rajapaksa were dropped on Thursday by a court, which handed his passport back as he acquired immunity from prosecution after being elected last weekend.

Under Sri Lanka’s constitution, no court proceedings can be maintained against a serving president. However, action could be taken after he leaves office.

The High Court had indicted Gotabaya Rajapaksa in September last year on charges of siphoning off 33 million rupees (around $185,000) in state funds to build a memorial for his parents. He had pleaded not guilty.

Neither the UNP nor the opposition SLPP has an absolute parliamentary majority to form a government.

Ruiz defeat made me a smarter fighter, says Joshua