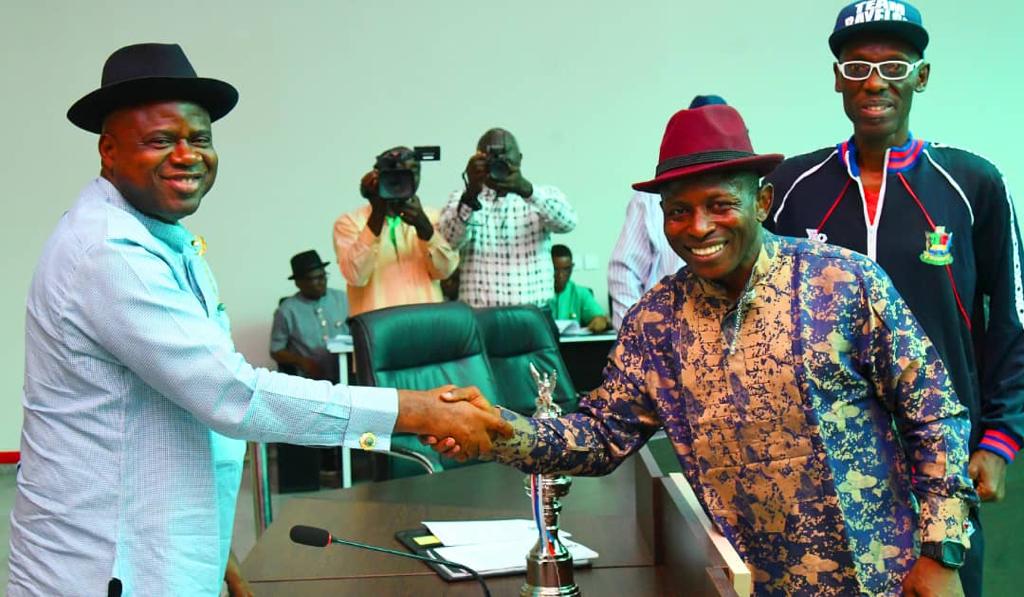 Governor Douye Diri of Bayelsa State splashed monetary gifts and automatic employment for athletes and medalists in the contingent  that represented the state at the 2022 National Sports Festival held, at Asaba, Delta State.

Coaches in the contingent also got some rewards for the victory.

It would be recalled that Bayelsa State came Second behind the host state, surpassing its earlier best position of third recorded at the 2020 festival hosted by Edo State in 2021.

Receiving the state’s contingent in a ceremony inside the Executive Council Chambers of the Government House, in Yenagoa, on Wednesday, Governor Diri recalled that Bayelsa won 109 gold, 104 silver and 87 bronze medals.

Also announcing reward packages for Coaches and secretaries of gold medal teams got N500,000 each while their assistants got N300,000 each.

He  also rewarded non-medalists with N50,000 each.

Futher expressing appreciation on behalf of the state for the athletes, Governor Diri  equally announced automatic employment for those yet-to-be employed in the state Sports Council and directed the Ministry of Youth and Sports to work out the modalities.

“You have broken your own record and now Bayelsa is the number two sporting state in Nigeria. “Your record and the state’s exploits in football and other sporting activities have resulted in my being nominated as the Best Sports Governor in Nigeria.

“That award will be dedicated to all of you. Let us continue to raise the image of the state like you did in Asaba.”

Dr. Daniel Igali, the Bayelsa State Commissioner for Youth and Sports, earlier in his speech, said Bayelsa was the only state that rewarded its athletes instantly at the games, which inspired them to exceed their target.

According to Igali,  the team broke six records in swimming in  the men and women categories as well as in weightlifting, stressing that  as one of the premier sporting states in the country, there was need to upgrade its sporting facilities in order to be able to host the National Sports Festival in no distant time.

Why we went to Federal High Court – Okpe Union