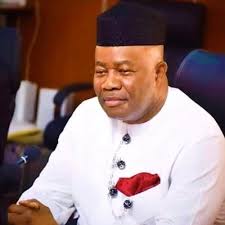 “The South-South leaders know the meaning of purposeful leadership that feels their pains, understand their yearnings and pursue the aspirations of this country. Chief Godswill Akpabio is a key to the solution of the Niger Delta problem.”

They also praised President Muhammadu Buhari for taking decisions he considers best for the overall benefit of the Niger Delta people.

At a meeting in Calabar to discuss 2023 politics, governance and its broader impact on democratic institutions and norms, the leaders accused some cynics in the country of trying to throw a monkey-wrench into the works of the current administration.

“Chief Godswill Akpabio has done his best to complete the NDDC Audit. The Audit Report is an important step forward.”

The leaders described Akpabio as an iconic figure, a dogged advocate for the interests of Nigerians, a hope for Nigerian politics and a magnet attracting a number of Peoples Democratic Party (PDP) members to the ruling All Progressives Congress (APC) in the country.

They also gave depth to the practical dimension of Akpabio’s ideas on development.

Particularly, the leaders hailed the former Akwa-Ibom State governor for doing what is best for the people, reframing the way growth on the Niger Delta region is understood, strengthening fiscal discipline and transparency in the management of public resources.

Spokesman of the South-South Front (SSF), Chief John Harry, told journalists after the meeting that the leaders commended Akpabio for expanding existing social development programmes, spending on much needed infrastructure, offering the clearest policy and enhancing peace and development in the Niger Delta region.

The leaders highlighted Akpabio’s pivotal role in the development of the Niger Delta region, projects in health, education, job creation, housing, agriculture, security, road construction and other areas of development.

They insisted on Akpabio for the coveted slot of president in 2023,

“We welcome the current moves to consider the former Akwa-Ibom State governor. Chief Godswill Akpabio is a compassionate human being who cares about the well-being of Nigerians. He knows the issues. He is extremely qualified, the best qualified among the presidential aspirants. He has the character to do the job’’

They also urged ex-militants not to allow opposition politicians in the country to use them to persecute political opponents.

‘SPDC/NCDMB agreement on gas infrastructure to generate over 30,000 local employment’