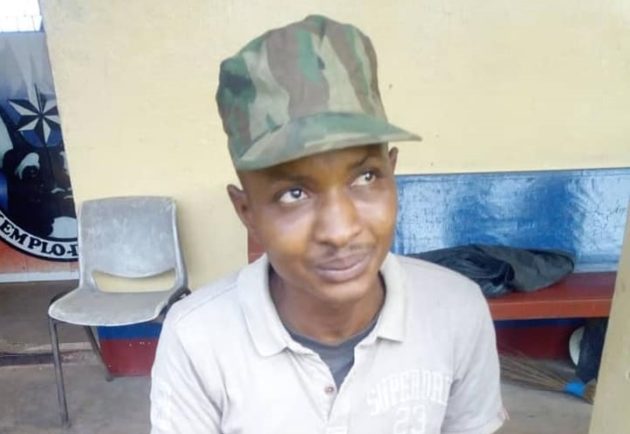 Baba Fryo, veteran Nigerian singer, says one of the ‘fake soldiers’ who brutalised him has finally been arrested.

Baba Fryo, real name Friday Igwe, took to his Facebook account to reveal that the ‘fake soldier’ was identified after thorough investigations by the army at Ojo cantonment.

“This is one of the unknown fake soldiers that deliberately beat up our living legend Baba fryo Igweh yesterday without a reason,” Fryo wrote.

The veteran ‘Galala’ music pioneer also expressed his gratitude to the army for its swift response in apprehending the assailant.

“People need to be very careful these days as there so are many Babylonians posing as soldiers.
I am very proud of the Nigerian Army and OC MP Ojo Cantonment Capt. A.S ATUNWA for his effective investigations and action taking (sic) in this matter,” he said.

“We give thanks to the most high God. The picture below is the picture of the very fake soldier. He has been arrested by the military police Ojo cantonment his name is Muhammed Ishaq.
Thank you Nigerian Army Ojo cantonment.”

The ‘Dem Go Dey Pose’ crooner had shared photos of himself with a battered face while alleging that the bruises were inflicted by personnel of the army.