Sokoto-based Islamic preacher urges Muslims to kill blasphemers, says ‘It’s the least they can do for the Prophet Mohammad’ 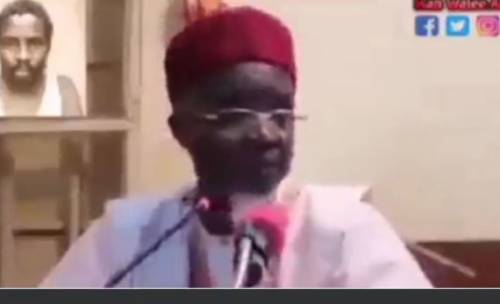 A Sokoto-based Islamic cleric has in a viral video encouraged the Muslim faithful to assassinate anyone who dares to insult Prophet Muhammad.

The preacher vehemently charged Muslims to take action against anyone who attacks the integrity of the prophet.

also made reference to someone who had allegedly insulted Prophet Muhammad and was in police custody.

The cleric urged his congregation to kill the suspect once he was released.

SaharaReporters reported on Thursday how Ms Deborah, a student of the Shehu Shagari College of Education in‪ Sokoto State was burnt to death by her colleagues for allegedly insulting Prophet Muhammad.
READ ALSO: http://Gov. Ayade sacks monarch for attending PDP meeting
In a viral video obtained by SaharaReporters, the preacher said, “He wrote on Facebook. He said a lot of things that are not right about the prophet of Allah and in Sokoto, I said he was courageous. For us, we kill such a person. For the prophet of Allah, the least we can do is to kill.
“We are not like Muslims, because Kano Muslims are more like merchants. That’s why when they insulted the prophet as one practising sodomy, no action was taken. They insulted the prophet and called him an adulterer and paedophile, yet no action was taken but here in Sokoto, we kill such people.
“Anyone who insults the prophet, our duty is to kill such a person. If they claim the man who blasphemously insulted the prophet was mad, we’re also a bunch of mad people here in Sokoto.
“The extent of our sanity is proportional to how someone attacks our holy prophet. Once he’s attacked, we’re mad enough to strike. I’m speaking the truth; may God bless the people of Sokoto for defending the prophet’s integrity.
“Any Muslim faithful who joined the demonstration to the palace of Sultan of Sokoto has demonstrated enough evidence that he is a true discipline of Danfodio.
“Once he is out of the police custody, take action; assassinate the blasphemer. The claim of insanity to protect him is invalid. If he’s mentally deranged and would not insult anyone except the prophet; then we’re also insane once the prophet is insulted.
“Kill him once you see him. Not just him but anyone who insults the prophet.
“There’s no other punishment other than death for insulting the prophet of Islam.

Even if the person is a Muslim, he must be assassinated,” he added.