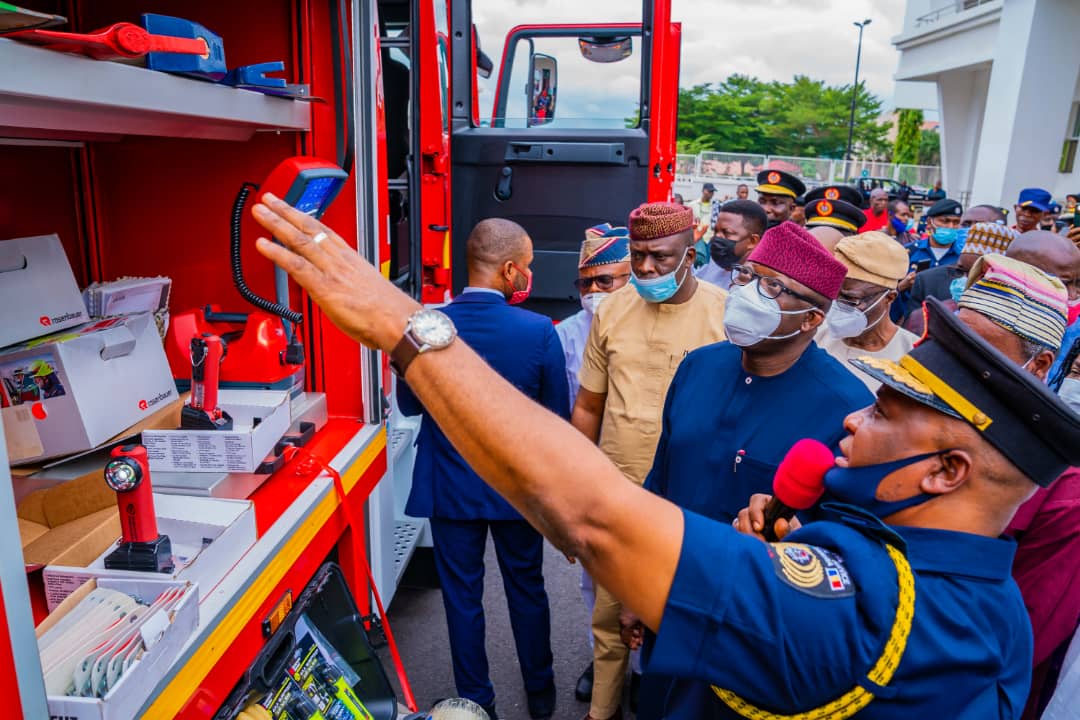 Ekiti State Governor, Dr Kayode Fayemi Thursday disclosed plans by his administration to ensure the state has a befitting and operational fire station in each of the six federal constituencies within the shortest possible time.

The governor disclosed this stated this while taking delivery of a state-of-the-art fire-fighting truck and gears donated to the state by the Federal Government as part of the drive to improve fire fighters’ capacity to curtail disasters.

At the event, which was attended by the Deputy Governor, Otunba Bisi Egbeyemi, representative of the Minister of Interior, Mr Bola Ilori, members of Ekiti State Executive Council and the management team of the Federal Fire Service, Dr Fayemi said his administration had taken steps to improve the operational processes of the Fire Service in the State and tasked the Office of Transformation, Strategy and Delivery (OTSD) to work closely with the State Fire Service to understand its challenges and recommend preliminary operational improvements at combating fire disaster.

Governor Fayemi also appreciated President Muhammadu Buhari for approving the creation of a Federal Fire Service Command in Ekiti State to complement activities of the State Government through the State Fire Service.

He added that the commitment of the President to ensuring a functional Federal Fire Service and the huge investment in the service, in terms of trainings, fire fighting trucks and other modern equipment, had led to a remarkable improvement in the capacity of the service.

This, according to him, was a departure from what was obtainable some years back when the federal fire service could not boast of more than five fire fighting trucks.

His words: “The President must be commended for this and other interventions he is doing quietly. This gesture- a gift of a fire-fighting truck- is an indication that they now have a good number of state-of-the-art trucks and can send some to the states. This is quite commendable.

“I (therefore) charge the Federal Fire Service personnel to make good use of the truck and I also urge people in the State to utilize this great opportunity by calling on the Federal and State Fire Services for necessary advice and timely actions on fire prevention when the need arises.”

The Governor also highlighted some of his investment in the sector to include procurement of fire-fighting equipment and appliances which included Five fire-fighting trucks, three water tankers, six fire ambulances and one turn table truck with 85feet ladder for the use of Ekiti State Fire Service in addition to the provision of adequate fire-fighting gears for each of the personnel.

Other achievements, according to Fayemi, include training of personnel by a team of Instructors from Cobb County Fire Service, Atlanta, USA and Israeli based Emergency and Disaster Management Company on the use of the modern equipment and appliances to build their knowledge and techniques, as well as approving the recruitment of 59 Fire personnel to replace the officers that were no more in the service and to further strengthen the existing workforce of Ekiti State Fire Service.

Earlier, the Controller General of the Federal Fire Service, Dr Liman Ibrahim expressed delight at the level of infrastructural development in the state and commended the effort of Governor Fayemi for his consistency at ensuring conducive environment for the citizens in spite of the various challenges bedevilling the nation.

Dr Ibrahim noted that the deployment of the fire-fighting truck was part of the effort of the federal government to strengthen safety and protect the people and property of Ekiti state from unforeseen fire havoc that could ravage the wealth of the state.

Chief Press Secretary (CPS), to the Governor, Mr. Yinka Oyebode, made this information available to the media through a signed statement.

OPINION: Fayemi, The Undertakers and The Naysayers