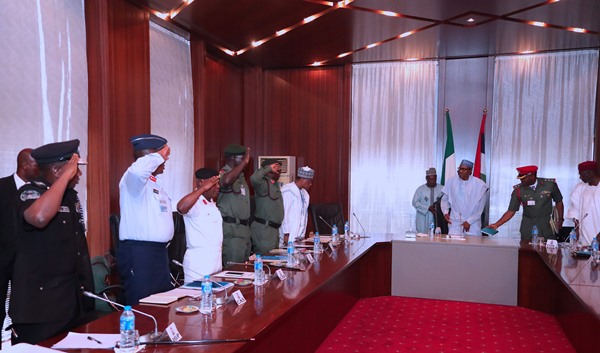 Upon their return from recess on Wednesday, Senators and Representatives of both houses of Parliaments called for the replacement of service chiefs who they claim were no longer capable of delivering on their mandate to tackle insecurity in the country.

They urged them to either resign or be fired by President Muhammadu Buhari.

Lawmakers said the recent upsurge in security-related challenges and “the devastating loss of lives   and properties “across the country was enough ground for them to ask for the service chiefs’ exit.

Wednesday’s plenary at both chambers were devoted to the debate on the rising terrorism and other forms of criminality.

President Muhammadu Buhari on Tuesday said he was “taken aback” by the resurge in banditry and promised harder measures against criminals.

Senate President Ahmad Lawan slammed the security architecture of the country as ineffective and fast deteriorating.

Abdullahi, in his lead debate, called on his colleagues to note the upsurge of security-related challenges and “the devastating loss of lives, limbs and properties that it unleashed on the nation.”

He further urged the Senate to note the comprehensive new National Security Strategy  that the government unfolded in December, 2019,  “with its very clear statement of goals, objectives and challenges that faced the nation particularly those challenges whose recent upsurge have a direct and devastating impact on the lives and safety of the people.”

The security challenges, according to him, include terrorism and violent extremism, armed banditry, kidnapping, militancy and separatist agitation.

During the debate that lasted for about five hours, the Senators called on Buhari to declare  a national security emergency in the country.

They disagreed on the necessity of adopting a state police model in the country but opted to set up a 17-member ad hoc committee to interface with all heads of security agencies for a way out of the deteriorating security situation.

The committee will engage the National Security Adviser on the implementation modalities of the December 2019 national security strategies.

The Senate also invited Inspector-General Mohammed Adamu for a briefing on Wednesday at plenary on the modus operandi of community policing.

Senators Solomon Adeola, Elisha Abbo, Betty Apiafi, Matthew Urhoghide, among others called for the sack of the service chiefs.

Adeola said: “The service chiefs have done well. We thank them what they have done. It is time for them to go.”

Apiafi said: “Most of us will agree that by the time they came into position, things were not really bad. They have done their bits and their tenure has expired.

“They are illegally occupying the seat. It will be good for the government to allow the security chiefs go and bring in new people to add vigour to the fight against security.”

“They have overstayed their welcome and they are bereft of ideas. Others should come in.”

Lawan said the legislature must not shy away from what affects the people.

He said: “This is not something we can do alone. We must work with the Executive to achieve these.

“The President himself has been working hard with security agencies to ensure that we protect the lives and property of our people but we have come to a point where the legislators will also intervene or we give the necessary legislation and support to the executive arm of government.”

In the House of Representatives, members called on the service chiefs to quit immediately.

They accused the military chiefs of   using the same strategies that failed to yield any positive results and said the President should fire them if they failed to honourably quit their positions.

The position of the lawmakers followed a motion of urgent public importance moved by the Chief Whip of the House, Mohammed Tahir Mongunu and 14 others.

The debate on the motion titled “Need to Curb the Incessant Attacks of the Boko Haram Insurgents in the Northeast”, lasted  over three hours with members showing visible anger.

Speaker Femi Gbajabiamila suspended all other business of the House to enable members debate the motion and take a decision.

Mongunu expressed concern over the recent upsurge in attacks by   insurgents in the Northeast.

Another member, Francis Waive said the service chiefs should ask themselves whether they have performed creditably well and whether they are proud of what they have achieved since their appointment in 2015.

He asked the Service to resign, stressing that the President should take another look at their performance, with a view to replacing them with fresh hands that would bring new  ideas into the security system in the country.

In amending the original motion, Waive asked the House to demand the immediate resignation of the service chiefs, while some members asked the President to immediately sack them.

Chairman of the House Committee on Defence, Jimi Benson, said: “The solution lies in the hands of the President. I don’t know why he has kept them since 2015 when they were first appointed. “

The House also resolved that the leadership of the House and indeed, the National Assembly should hold a tripartite meeting with the President and the service chiefs, with a view to finding lasting solutions to the security challenges.

Presidency hits Abaribe, says ‘he should be in jail for refusing to produce Nnamdi Kanu’