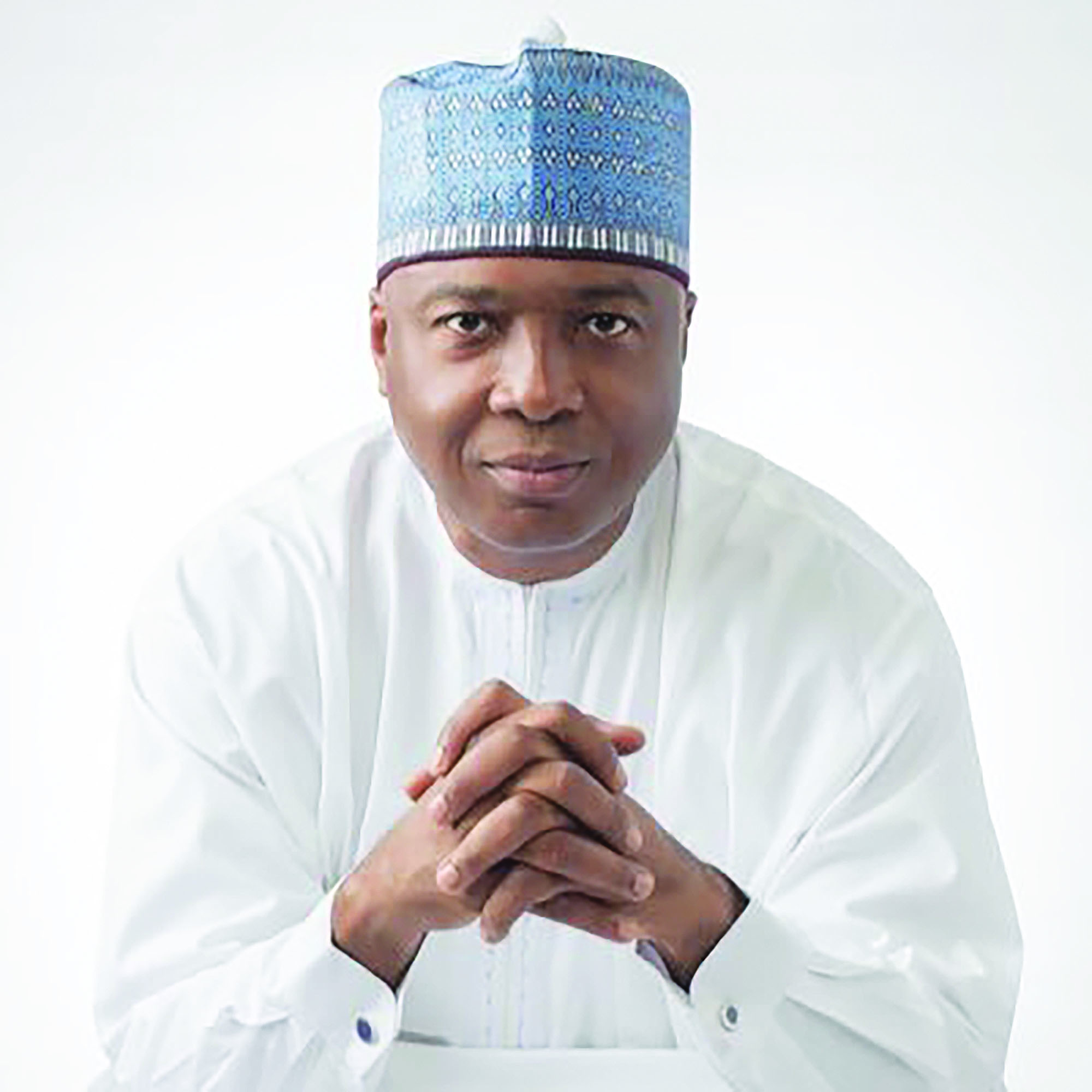 Bukola Saraki, former Senate President has reeled out his plans to bring about ‘real change’ in the country if he wins the 2023 presidential ticket of his party, the Peoples Democratic Party, PDP, reports AKANI ALAKA.

With over 1500 delegates who are supposed to vote to determine the presidential flag bearer of the Peoples Democratic Party, PDP at the primary, former Senate President Bukola Saraki demonstrated that he understand the need to convince members of his party to put him on the ballot, before attempting to convince the majority of Nigerians to vote for him as their next president when he formally declared his presidential ambition last Thursday in Abuja.

The former governor is one of the 15 aspirants expected to contest for the presidential ticket of PDP at the special national convention of the party scheduled to hold in Abuja at the end of May. But as noted by the chairman of his Campaign Council, Prof. Iyorwuese Haghe at the Breakfast and Media Session entitled, “Why I Am Running for President”, organised by Saraki Support Group, the former Senate President had been on the road trying to convince members of his party across the country personally or through his campaign organisation to put him forward as their 2023 presidential candidate in the past three months.

“His declaration in all the 36 States of Nigeria was well received and the PDP Members and the Nigerian citizens are already in a frenzy to see him win the primaries to become the flag-bearer of his party the PDP,” Hagher said. He described the former Senate president as “a real change-maker” who will deliver the real change of peace, pursue life, liberty, and happiness, guaranteed security, prosperity and good health for all which Nigerians wanted in 2015 when they elected the administration.

“In Bukola you are witnessing a social movement in Nigeria when said the Campaign Council manager ‘Nigerians are ready to elect their President, judged by the content of his/her political achievements and vision and not by his tribal origin, what language he speaks, and his faith,” he added paraphrasing Dr Luther King Jr.
Even then, the former Senate President also demonstrated that though he is yet to get the party’s ticket, he is ready for the task of turning Nigerians around if he is eventually the chosen one at the presidential primary of PDP scheduled for the end of the month. For one in the soft copy of his ‘MY SOCIAL CONTRACT WITH NIGERIANS’ distributed at the event, the former Kwara State governor listed five key policy pillars that will drive his administration’s efforts to turn Nigeria around if elected.

The former Kwara State governor added that the five pillars arose from his understanding that the difficult journey to the rebirth of Nigeria can be actualized with sound knowledge grounded in contemporary experience in the management of men and resources, vision, and a deep commitment to good governance. He said he can bring these changes to the table while working with other Nigerians to break barriers to the country’s development and growth through the promotion of responsible leadership.

While speaking at the event, Saraki further gave specifics of his plan and the importance of the 2023 election to the destiny of Nigeria: “2023 presents us with a great moment of decision: the moment to choose hope over hopelessness; the moment to choose peace and security over fear and terror; the moment to choose unity and inclusion over division and exclusion; the moment that we draw a bold line in the sands of history and say, “no more,” and then move ahead as one people, as one nation, towards our God-assigned destiny as the greatest black nation on the face of the earth.”

While touting his achievements as Kwara State governor, Senate president and aide of former President Olusegun Obasanjo as a demonstration of his ability to give the country effective leadership, Saraki promised to improve the literacy rate in the country by enforcing the law on compulsory basic education and improvement in quality of teaching in all public schools, push the compulsory health insurance coverage for Nigerians from the current 7 per cent to 50 per cent in the first two years of his administration and provide the right training, equipment and right incentives for security operatives to protect the lives of Nigerians if he is elected.

He also promised to diversify the nation’s economy by raising the revenue the country is earning from the non-oil sectors to the same level as being currently earned from oil, ensure strict compliance with the rule of law and guarantee consequences for crime, collaborate with the industries to train one million of our youths in technical and vocational skills each year and deliver half a million affordable housing units every year to low-income earners and eliminate urban slums.

In addition, the former Senate president said if elected, his administration will invest massively in skills in cloud computing, data analytics, programming and other such in-demand skills to drive innovation and competitiveness among Nigerian youths and create the Nigeria Creative Industry Initiatives to position Nigeria as a global leader in the economy of the cultural production.

He also promised to ensure that the nation’s universities and higher education institutions are competitive and well-funded by adopting models and approaches that have served the most successful higher education systems in the world while providing targeted incentives to reverse the brain drain and keep Nigerian professionals in the country.
However, he will only get the opportunity if he is only able to beat the other 14 aspirants for the PDP presidential ticket.

The former Kwara governor said he is running because there is a need to address problems that have been confronting the country for years.

“We all have reasons to be worried about the future of this country. But this is not the time to surrender and wallow in despair,” he said.

“Rather, this is the moment, when all patriots and citizens of goodwill must show courage, rise above those lines of divisions that have kept us apart over the years and ask this very important question: ‘where do we go from here?’

“I decided to become a doctor because of this ingrained desire to help and to serve others. And when in 1999, I joined the government as special assistant to President Olusegun Obasanjo, I became even more acutely aware of the limitless possibilities for service through government; and of how political power in the hands of a committed, competent and courageous leadership can solve real problems and uplift the destiny of a nation and her people.

“It was this same realization that motivated me to contest and win the election as the Governor of Kwara state in 2003.”

The presidential hopeful said as governor nobody thought he would succeed, but he was able to effect some changes in Kwara.

“I did not solve all the problems, but in eight years I left Kwara state better than I met it. We were able to confront old problems with new and innovative solutions,” he said.

“We implemented bold education reforms that brought children back to school and improved the quality of teaching across the state.

“In all the positions that I have had the good fortune to occupy, I have been driven by the deep conviction to serve, to help, to proffer solutions and to leave behind a legacy of courage, hard work and unyielding commitment to making a difference.”

Saraki said as president he would increase the revenue from the non–oil sector.

“As long as there are still people in this country who believe that they can break the laws of Nigeria with impunity; who think that crime has no consequences, then the job is not done,” he said.

“And this is why I want to be president because I will ensure strict compliance with the rule of law and guarantee consequences for crime.

Accoding to Saraki: “I will deliver 500,000 affordable housing units annually. I’ll create a viable platform to protect the African continent. I will be President for all because I represent the Nigerian identity. I will be the bridge between the North and South.”

He also stated that he would be the bridge between the young and the old.

Saraki said he would also be the bridge between the private sector and the public sector.

Although he acknowledged the great efforts of all past leaders over the years, he, however, said as long as there is a child in Nigeria that cannot read or write, then the job is not done.

“And it is for this one child that I want to run for President because I will ensure that the law on compulsory basic education is enforced and quality of teaching improves in all public schools,” he said.

He acknowledged that the nation had experienced setbacks in the last couple of years that no one could have imagined possible only less than a decade ago, he said 2023, therefore, presents a great moment of decision for Nigerians.