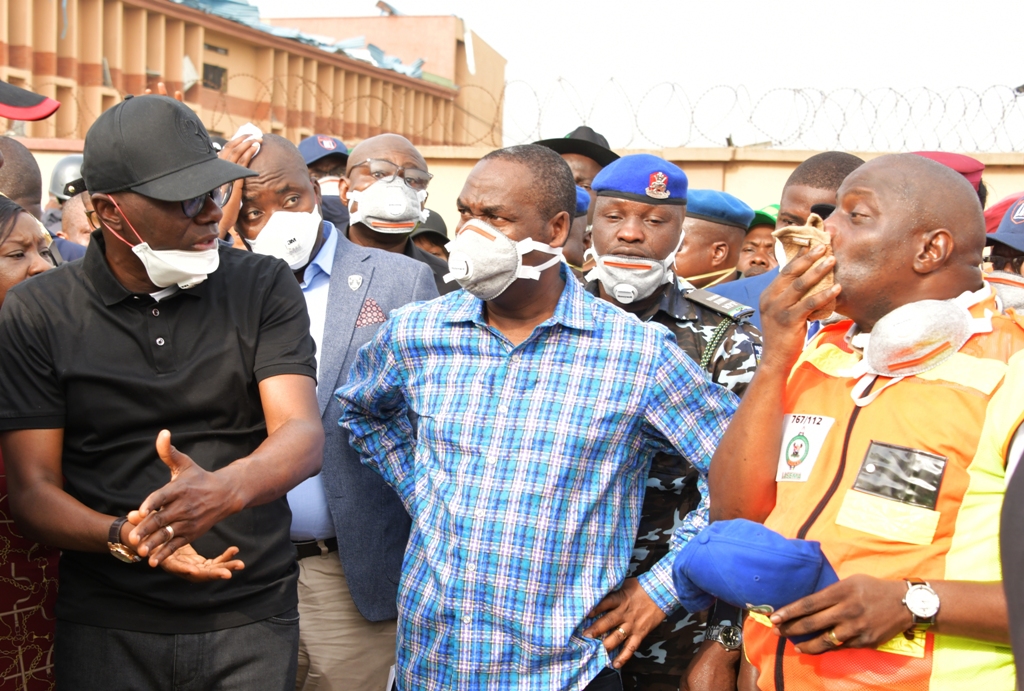 …Meets with President Buhari on the matter

Governor Babajide Sanwo-Olu of Lagos State has set up a high-profile committee to investigate the remote and immediate cause of the Sunday morning explosions that ripped through Abule-Ado and Ado Soba towns in Amuwo Odofin area of the State, which left a large-scale destruction in its trail.

Gov. Sanwo-Olu, his deputy, Dr. Obafemi Hamzat, and members of the State Executive Council were at the scene of the explosions on Monday to meet with victims and take stock of the assets destroyed.

The Governor, who described the incident as “a disturbing development”, constituted a fact-finding Committee to immediately launch an investigation into the remote cause of the explosion.

The committee, to be chaired by both Dr. Hamzat and Commissioner for Special Duties, Mr. Omotayo Bamgbose-Martins, has 14 days to submit its findings.

Besides, Sanwo-Olu announced a N2 billion Emergency Relief Fund for the victims of the explosion. He said the State Government would immediately release N250 million into the Funds to provide instant relief for those affected by the explosion.

There have been conflicting reports in the media as to what led to the explosion. But, Sanwo-Olu urged members of the public to wait for the outcome of the committee’s findings, cautioning residents against sharing unconfirmed information that could raise panic.

The Governor promised the State Government would unravel the root cause of the explosion, adding that recommendations from the investigation would be implemented to prevent re-occurrence of the incident.

He said: “On behalf of the Government, I commiserate with families that lost their loved ones, students that lost their teacher and everyone in this neighbourhood who lost their means of livelihood. My visit to the scene of the explosion this morning is not to apportion blame for the sad incident.

“As a responsible government, we are immediately setting up a fact-finding mission as to the remote cause of this incident. We are setting up a panel that will start work from today and will need to give us a report in the next two weeks. It is an inter-governmental and multi sectoral committee that will be headed by the Deputy Governor and Commissioner for Special Duties as co-chairman.”

Other members of the committee, according to Sanwo-Olu, include Commissioner for Education, her counterparts in Finance, Physical Planning, and Environment, Permanent Secretaries of the ministries of Health, Works and Infrastructure, Commissioner of Police, and Senior Special Assistant to the Governor on Security.

Sanwo-Olu described the level destruction in Abule Ado and Ado Soba as “monumental”, saying the resources to be appropriated in helping the victims to rebuild their lives were beyond what a single Government could undertake on its own.

He said: “The process of rebuilding this place is beyond what the Government, either at the national level or state, can also undertake on its own. Given the level of destruction, I am immediately setting up what I have called an Abule Ado/Ado Soba Emergency Relief Fund. It is a N2 billion relief fund and the state government will immediately be putting N250 million in that fund. Three banks have opened accounts for the Fund.

“Setting up this Fund is to give everybody the opportunity to be part of rebuilding this place and to be able to donate into it. The utilisation of funds, which will be headed by the Deputy Governor, will also be part of the responsibility that the fact-finding committee will be saddled with. To show our commitment to helping the victims recover, we have three bank account numbers already.

Sanwo-Olu said he would be meeting with President Muhammadu Buhari later on Monday to brief him on the incident, stressing that Lagos required the cooperation and support of the Federal Government in dealing with the situation.

How man, pregnant wife lost their lives in Lagos explosion