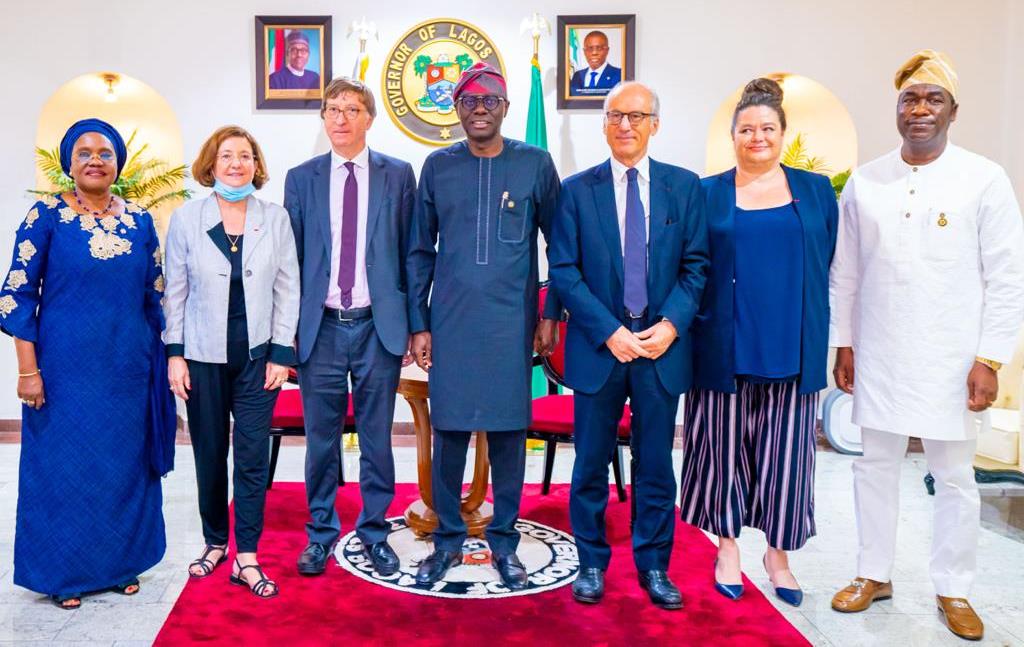 Governor Babajide Sanwo-Olu of Lagos State, on Monday, met with a high-powered delegation from France for strategic discussion on bilateral cooperation.

The visitors led by Sen. Bernard Fournier, are members of Foreign Affairs, Defence and Armed Forces Committee in the French Senate. They are in Nigeria on a three-day working visit.

The discussion focused around areas of partnership between the State and French government, including security, transportation and infrastructure.

The parliamentarians’ visit to the Governor came weeks after the representatives of Agence Française de Développement (AFD) visited Lagos to strengthen the existing bilateral ties between the two sides.

There are over 100 French companies based in Lagos.

Sanwo-Olu told the French parliamentarians that bilateral agreements with the State Government had recorded progress, disclosing that Lagos was open to more investment in provision of infrastructure in transportation sector and gaming industry.

He said: “We are happy with the kind of relationship we currently have with the French business community. We have been making giant leap forward in our relationship and we are ready to do a lot more, especially in the transportation sector where we currently have partnership with French firms. There is also an existing French loan which we have changed the scope of the transaction but we are on track on the deliverables tied to the funding.

“Lagos also recently sealed a MoU with the French government on e-sport. I’m delighted to share progress in this regard; we have some representatives of the State Government currently in Paris to further open more opportunities in the gaming sector as outlined in the agreement. The new Lekki Deep Seaport, which we will be commissioning next month, will be managed by a French company called CMA CGM Group.”

Sanwo-Olu assured the visiting parliamentarians that Nigeria remained safe for businesses and investments despite the security concerns in some parts of the country. He said Defence collaboration between France and the Nigerian Navy had improved security on the waterways, while also raising the capability of Nigeria security personnel to protect valuable maritime assets.

The contemporary security challenges bedeviling the nation, the Governor said, were not insurmountable, noting that the President Muhammadu Buhari-led administration had boosted the morale of the military with the provision of modern weapons and training to tackle the situation.

“Nigeria is a big, complex country with challenges like every other country on the planet. But, we will surely come out of the current tensions in due course,” the governor said.

Sanwo-Olu said Lagos would be interested in deepening cooperation with the French government in the agro-allied sector, inviting more investment in processing and production value chains.

He said: “It pleases us to know our development agency is collaborating with Lagos to solve challenges in the area of public transport. We will strengthen the agency to raise its contribution to the development of efficient and sustainable transport infrastructure. We will be ready to do better in other areas of partnership, including agro-allied.”

French ambassador to Nigeria, Mrs. Emmanuelle Blatmann, said the French parliamentarians’ visit to Nigeria showed the interest and deep respect France had for Nigeria. She said Lagos would be the main strategic partner of France on trade and security issues.