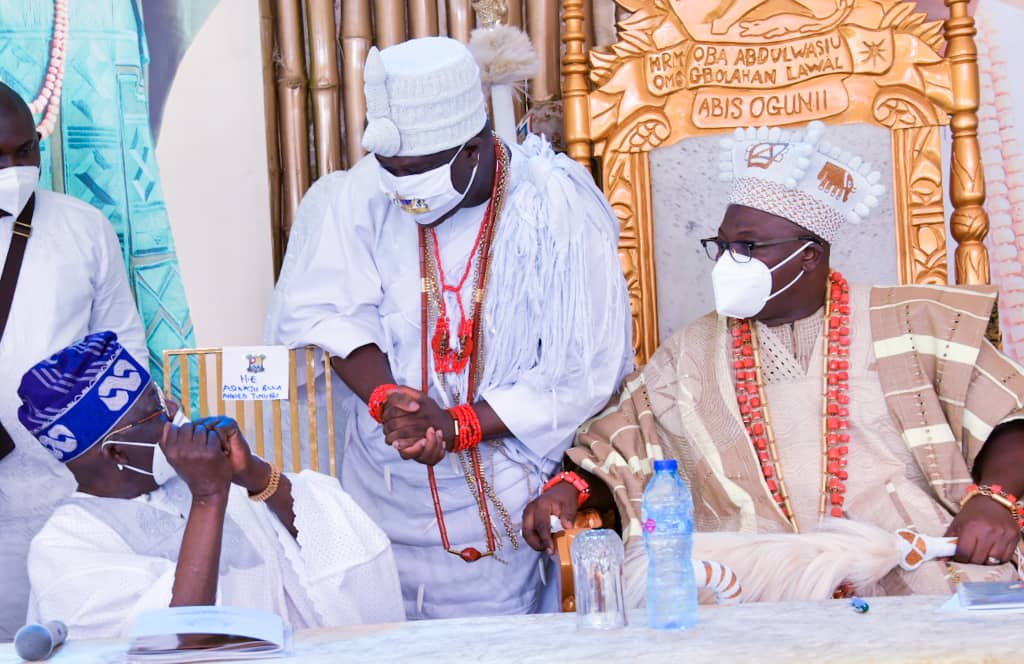 …Tinubu to Oba Lawal: ‘You need character to succeed’

The installation rite of His Royal Majesty, Oba Abdul-Wasiu Omogbahan Lawal, as the 15th Oniru of Iru land in Lagos State, has come to peak with the coronation reception and public presentation of the kingdom’s insignia, on Sunday.

The event, held at the Iru palace on Victoria Island, was marked with a parade of royalty and culture.

A roll call of VIPs, administrators and politicians, led by Leader of the All Progressives Congress APC, Asiwaju Bola Tinubu and Lagos State Governor Mr. Babajide Sanwo-Olu graced the occasion, which was also attended by traditional rulers within and outside of the State, including the Ooni of Ife, Oba Enitan Ogunwusi and the representatives of Oba of Lagos, Alayeluwa Rilwan Akiolu.

First Lady, Dr. Ibijoke Sanwo-Olu, was also at the event.

The reception, which was initially suspended due to the State’s Coronavirus (COVID-19) protocols, came three months after Oba Lawal formally received traditional staff of office and instrument of appointment from Governor Sanwo-Olu to ascend the Iru throne.

At the event, Oba Lawal, a three-time member of the State Executive Council, unveiled his economic development plan for the kingdom, Let’s Develop Iruland Together condensed in acronym “LeGIt”. The blueprint, the monarch disclosed, is tailored to reflect key deliverables of the T.H.E.M.E.S agenda of the Sanwo-Olu administration.

The governor, in his remark, described traditional institutions as “indispensable branch” of Yoruba society, stressing that the socio-economic growth witnessed in Iru kingdom in the last two decades had contributed in no small measure to the development of Lagos.

Governor Sanwo-Olu, represented by his deputy, Dr. Obafemi Hamzat, commended the monarch for keeping peace and for sustaining the effort to unite members of the royal families after ascending the throne.

The governor said he looked forward to more rewarding development activities in Iru land, but urged denizens to rally round the Oniru and maintain peace in order to achieve the monarch’s outlined objectives.

Governor Sanwo-Olu said he had absolute confidence in the leadership ability of Oba Lawal to transform the kingdom into a 21st century city of commerce and culture, urging him to bring his wealth of experience in public service to bear in the administration of Iru land.

Said he, “I have absolute confidence in the ability and capacity of His Royal Majesty to bring about greater transformation that will benefit everybody and further reposition Iruland within the metrics of development in Lagos State.

“During the installation ceremony in June, I enjoined the Oniru to strengthen the existing bond of unity within Iruland for the overall development of peace and progress of this kingdom.

“Two months on the throne, I’m pleased to note that the monarch took this advice to heart as exemplified by his very impressive actions characterised by wisdom, knowledge and large heartedness.

“My advice to all citizens of this great kingdom, as well as residents, is to continue to stand firm and united behind the king in order to advance the development and prosperity of this kingdom for the benefit of all.”

The APC National Leader said the event should signal an end to the tussle and controversies that trailed the selection of Oba Lawal as Oniru, saying it was time the kingdom moved on.

He vouched for the leadership qualities of the monarch, pointing out that Oba Lawal has enormous capacity to endure, learned and listens.

Tinubu, who described the Oniru as a son, said the Oniru was a good choice for the kingdom and urged members of ruling houses in the kingdom to rally round the Oniru for the progress of Iru land.

Tinubu, however, urged the monarch to show good character as key component of his leadership, noting that his effort to move the kingdom forward would be futile without character.

Oba Lawal described the event as “another significant chapter” in the annals of the kingdom, thanking Governor Sanwo-Olu for approving his selection by the kingmaker and the support since his installation.

He specially praised Asiwaju Tinubu, whom he called a mentor and father, for giving him the opportunity of his shots in public service.

The monarch said the priorities of his leadership would focus on socio-economic development of the kingdom, disclosing that the palace had established an independent nonprofit organisation – HRM Abisogun II Foundation for Peace and Development (HAIIF) – with the objective to drive multi-stakeholder partnerships for peace and prosperity of the kingdom.

He said, “The burning desire to proffer pragmatic solutions to challenges facing Iru land has led to the initiative called LeGIT.

“This will be a rallying point and clarion call to all stakeholders to work with me to develop Iru into one of the most sustainable communities in Lagos. Our plans are in line with development agenda of the governor.”

The monarch, thereafter, unveiled the traditional insignia of the kingdom, which reflects Iru culture and its dominant means of livelihood. The insignia depicts fishermen, newbouldia leaves and the iconic Iru crown in golden hues.

The event was resplendent in royal fascination, with various culture troupes and drummers entertaining guests with rendition of folk songs and poem.