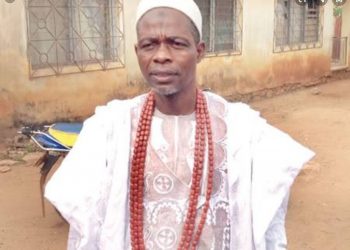 The Alawo of Awo-Ekiti in the Irepodun/Ifelodun Local Government Area of Ekiti State, Oba Abdulazees Olaleye, who was sacked by the Ekiti State High Court, last week, has appealed the judgement, saying that he remained in charge with the Appeal already filed at the Appellate Court.

The High court had in a judgement delivered by Justice Abiodun Adesodun in a suit number HAD/134/2020 on the 1st March 2021 removed the monarch from throne, saying his selection contravened the State’s Chieftaincy edict.

In the appeal, the monarch faulted the position canvassed by the High Court that his selection violated the extant rule, saying he was validly selected to occupy the throne of his forebears.

The monarch urged the appeal Court to upturn the verdict of the High court and restore him back to the throne .

Oba Olaleye said it was a gross abuse of court process for the High Court to adjudicate on issue that had earlier been determined in his favour at the Appeal Court, saying it becomes a functus Officio the moment a higher court adjudicates on any issue.

The Appellant challenged the verdict of the lower court on the  grounds that ; “The learned  High Court Judge erred in law by assuming jurisdiction and decided same, whereas he didn’t have jurisdiction to entertain same.

“He also erred in law by not taking into cognisance  the date the appellant was installed and considered the suit challenging him statute barred and therefore reached a wrong conclusion.

“The learned Judge also erred in law when he entertained the suit by ways of originating summon. This action becomes a  nullity in law because the appointment of Alawo was by executive decision and can only be challenged by way of certiorari.

“The learned Judge also erred in law by not giving the appellant a fair hearing at the trial and thereby reached a wrong conclusion or decision. The decision of the Court was also against the weight of evidence provided in court.”

On that premise, the appellant sought the following reliefs: “An order of the court allowing the appeal, an order setting aside the decision of the lower court delivered on 1st March, 2021 and order of the Court restoring Oba Abdulazees Olaleye as Alawo of Awo Ekiti forthwith.”

The appellant contended that he remains in charge of the town as validly constituted traditional authority  pending the determination of the appeal since all processes had been duly filled and served on all respondents.

Sequel to the installation of the monarch by former Governor Ayodele Fayose, one Prince Ebenezer Aladejuyigbe had gone to court on 24th July , 2015, saying the the selection and approval contravened the State’s Chieftaincy Law.