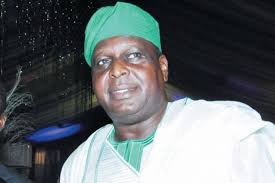 Runsewe also commended the Lagos State Government for its prompt decision to fish out brains behind the Lekki public naked dance.

The NCAC boss gave the commendation in a statement in Lagos by his media aide, Mr Frank Meke.

He said that the show negated the beauty of Nigerian culture and ways of life.

Runsewe, who had zero tolerance for attitudes and culture unbecoming of well brought up Nigerian young persons, described the Lekki public show as unacceptable, jezebelistic and sin against Nigerian culture.

He said that the act must be condemned and rejected by Nigerians from all walks of life, saying it had ridiculed the nation’s culture.

The NCAC boss, whose major forte was to reposition the true gains of Nigeria’s diverse cultural history and impact, said that the Lekki debacle must be used as an example to officially clamp down on promoters of strange entertainment from the “pit of hell’’.

“Nigeria will never succumb to imported cultural pastime or to blackmail, tailored to destroy centuries old and rich Nigerian culture.

“This dizzying madness can’t and would not be allowed to turn Nigeria to a destination for sex and illegal drugs tourism.

“Enough is enough, and for God’s sake, where is this coming from?”

Runsewe reacting to various reports and calls to his office on certain alleged offences against Nigerian culture promoted by a pay TV station, said that his office was investigating the allegation against the TV company.

He said they would work with other relevant government agencies to find lasting solutions to any foreign cultural infractions and subtle attempts to colonise the minds of the Nigerian youths.

He called on traditional rulers to join hands with government to check the open rage and rape against Nigerian culture with possible consequences of the unimaginable.

“In Nigeria, we love and respect our mothers and sisters, women in general, therefore, we will not condone deliberate acts that will betray the values of our culture and make our heroes past to turn angrily in their graves,” he said.

Runsewe urged state governors to empower agencies and departments of culture to arrest the organised assault against established and respected Nigerian way of life.

“We must be proudly Nigerian and resist vigorously attempts to insult the Nigerian women,” he said.

The truck with number plate APP 713 XL, showed the women dancing on a stripper pole wearing only brassieres and underpants.

The truck was seen around the Toll Gate Plaza along the Lekki-Epe Expressway, Lagos, on Friday night. (NAN)