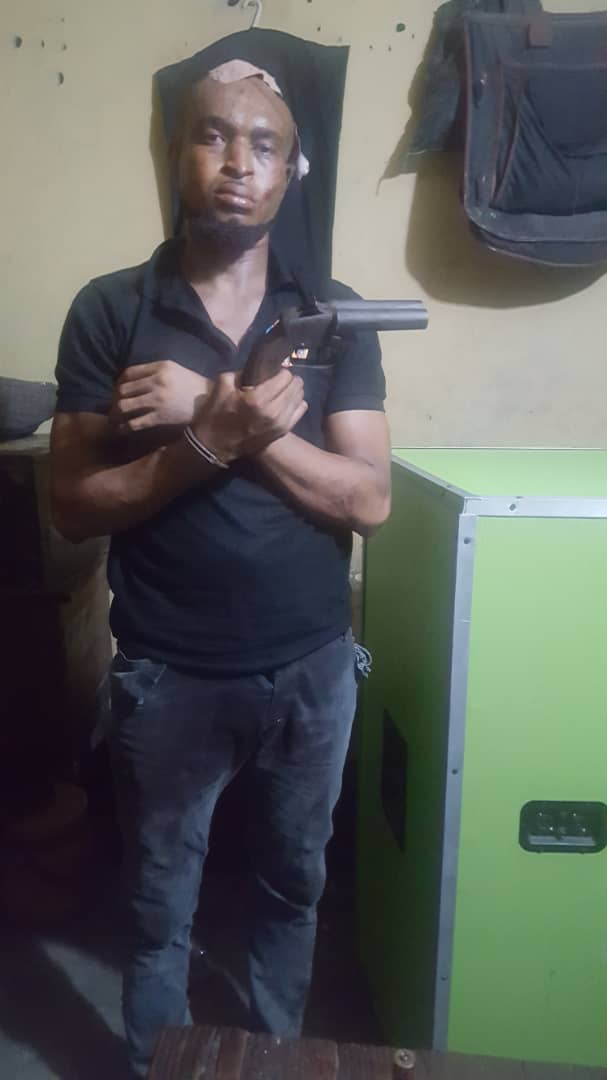 Share
Joy Anyim
The Police in Lagos have confirmed the death of a traffic robber, killed during a gun battle between a gang of robbers and a team of policemen from the Okokomaiko Police Division.
The robbery gang had been unleashing terror on motorists and commuters around Casidy Bus Stop and Okokomaiko.
It was gathered that a police detachment, on surveillance patrol, intercepted the gang at Cassidy Bus Stop, at about 10:20pm, last Friday.
The gang immediately opened fire on the police, who responded with a superior fire power. The gun battle resulted in the death of a suspected robber, while one other member of the gang, Adigun Ganiyu, 26, was arrested.
Confirming the incident, the  spokesperson for the Lagos State Police Command, DSP, Elkana Bala said, “ The hoodlums engaged the police in a gun battle but eventually succumbed to the superior power of the Police. One of the hoodlums was fatally injured, while  Ganiyu was arrested. Other gang members escaped.”
On what was recovered from the suspect Bala said, “ one double barrel gun with one live cartridge and two expanded cartridges were recovered. One motorcycle used by the hoodlums for the robbery operation was also recovered.”
Related Posts

He further stated that the arrested suspect have confessed that his gang is responsible for series of traffic robbery along Okokomaiko.
“He is helping investigators with useful information about his fleeing colleagues, while Investigation is ongoing,” Bala stated.
In a related development, Policemen attached to the Ilemba-Hausa Police Division, have arrested a suspected traffic robber, Justice Igboanusi.
According to the Lagos PPRO, the police had intercepted a gang of traffic robbers who were shooting sporadically, last Saturday at Church bustop, Ilemba at about 10:30pm.
The PPRO said, “ Surveillance patrol team attached to Ilemba Hausa Police Station, intercepted a gang of traffic robbery suspects operating on motorcycle, along Church bus stop Ilemba. They were shooting sporadically. The 29-year-old Igboanusi of NO. 11 jinadu street, Ajangbadi  was arrested.
“ One short double barrels gun with one live cartridge was recovered from him while other gang members escaped.”
He said Investigation is ongoing as the suspect will be charged to court.