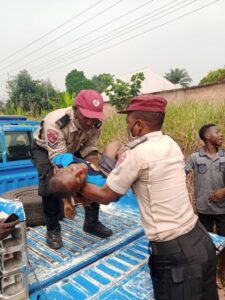 About 20 persons had lost their lives in a ghastly motor accident which occurred, on Tuesday, at Huturu village on Bauchi-Kano road in Ganjuwa Local Governnent Area of Bauchi State.

This was disclosed by the Public Enlightenment Officer of the Federal Road Safety Corps (FRSC), Bauchi State Command, Yusuf Abdullahi.

Confirming the accident to the News Agency of Nigeria (NAN), in Bauchi, Abdullahi said the accident involved a commercial Golf 3 bus and a Sharon Volkswagen vehicle at about 11.30 a.m, pointing out that personnel of the Corps arrived the scene of the accident about 12 minutes later.

Giving statistics of the victims of the accident, Abdullahi said, “Twenty-one people were involved in the crash and there were 12 male adults, five female adults, one male child and three female children.

The FRSC, who traced the cause of the accident to speed violation and dangerous driving, added that the deceased would be buried in Hunturu village.

He also said the injured persons were taken to the Kafin Madaki General Hospital in Ganjuwa LGA of the state for treatment.

It was observed that the victims were burnt many of them beyond recognition.