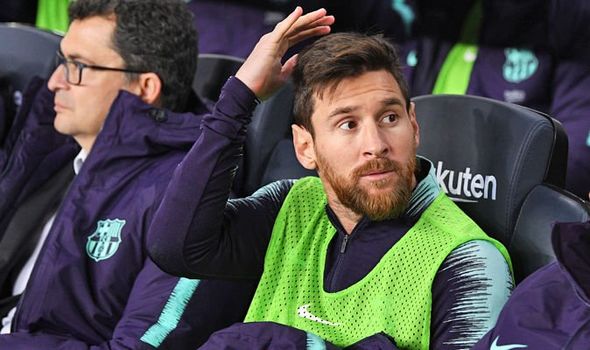 Barcelona coach Ernesto Valverde, has sought to ration Lionel Messi’s game time with the aim of keeping his talisman fresh for the final gruelling stretch of the campaign.
Valverde is expected to start Messi for the first time in three matches for Sunday’s La Liga trip to the Catalan neighbours, Girona.
Barcelona is eager to protect their five-point gap at the top of the standings over nearest challengers, Atletico Madrid.
The fixture was earmarked as the first La Liga game to take place in the United States, but protests from other institutions mean it will be played at Girona’s Montilivi ground, rather, than the more glitzy surroundings of Miami’s Hard Rock stadium.

READ ALSO:2019: Lawmaker urges youths to resist being used as thugs
But Messi, the leading scorer in Europe with a remarkable 18 goals in 16 league starts, will still be the main attraction.
Messi was left out of the starting line-up against Leganes in their previous game, only the second time he has been benched in the league.
However, despite their wealth of talent, Barca were drawing 1-1 midway through the second half when they called upon their captain, who inspired them to a 3-1 victory.
Messi stayed at home altogether for Thursday’s trip to Sevilla in a Copa del Rey quarter-final first leg, and Barca were beaten 2-0, leaving them on the brink of elimination from a competition they have dominated since 2015.
Perhaps still haunted by Barca’s shock exit from the Champions League last season to AC Roma, the coach was unrepentant about leaving Messi out against Sevilla and also resting midfielder Sergio Busquets.
“I don’t regret resting Messi, it’s what I had to do. In 2018 we paid the price for our efforts in the Copa, and now we’re rotating more because we think it’s the best thing to do. We want to maintain our gap at the top of the league and we think our squad players have to help us out,” Valverde said.
Though, they will benefit from a fresher Messi, Barca will be without France forward Ousmane Dembele, who has roared into form in recent weeks but is nursing an ankle injury sustained against Leganes.
Atletico, who look like being Barca’s only title rivals, host Levante on Saturday after earning a big 3-0 victory at Huesca in their last outing.

READ ALSO:Don’t break up Nigeria by urge to break news, Lai Mohammed charges media
Real Madrid, who is 10 points behind Barca in third, will be looking to build on last week’s encouraging 2-0 win over Sevilla, described as their best league display of a torrid campaign, when they visit Espanyol. (NAN)

Explosive device goes off near Russian Embassy in Syria’s Capital