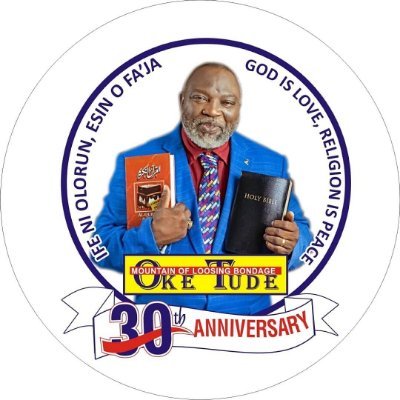 General Overseer of Oke Tude Ministry, Dr. Samsudeen Saka has called on government and public-spirited individuals to support his quest to enthrone love, tolerance and peaceful co-existence between Christians and Muslims in the country.

He made this call recently during a press conference on the forthcoming 30th anniversary of the ministry, in his church office in Ogudu, Ori-Oke Lagos State.

According to Dr. Saka, his aim is to bridge the gap between Christianity and Islam, and to propagate the message that Christians and Muslims are cousins as they share a common source from Abraham. “ our vision is to raise evangelists on religious tolerance, who will spread the message throughout Nigeria in particular and the world in general. With our crusades we believe in a short time, issues of religious crisis in all parts of the country will be a thing of the past. The major cause of the religious crisis is ignorance. And we want to tackle this ignorance by building an  ultra-modern school.”

Unveiling his plans for the school, Dr. Saka wants to build structures that would groom people into knowing more, and understanding the different views of both Christian and Islamic religion.

“we want to have where people would be thought religious tolerance and peaceful coexistence. we also aim to have entrepreneurial centers within the school where students and members can learn things that would make them better persons in the future. The mission also wishes to set up a music studio, Bible and Quranic library and hospital for students and members. We want all these in our already acquired 2500 hectares of land at Ogijo, Igode in Ogun State.”

He called for support insisting that all must join hand towards taming restive religious groups. “our aim is to assist the government in de-radicalizing the restive religious groups in various parts of the country. We want to stamp out insurgency in the northern part so that we can once again experience love, peace and brotherhood just like in the days of our heroes past hence their labours shall not be in vain. This work cannot be completed by me alone, that is why we’ve reached out for moral and financial support to achieve our aim.”