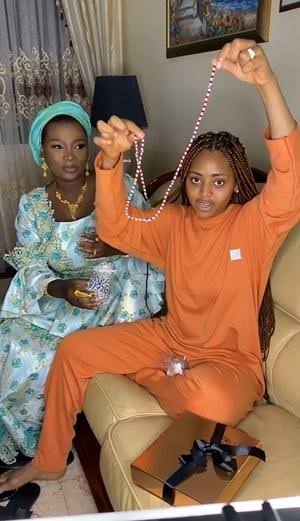 Actress, Regina Daniel has debunked claims that she used charms to secure her marriage with billionaire businessman, Ned Nwoko.

In a lengthy Instagram post, she said he was only contacted by the Keyamata maker, Jeruma to help raise awareness for her products. She admitted being paid for the job.

According to the 21 year old mother

of one, she made her stands clear to Jeruma from the beginning.

“This is for clarity aske here, I have and will never use any kayamata product. Jaruma paid me to help make random posts for her. I personally gave my terms concerning the kind of posts to be made, I was very mindful with my choice of words so as not to mislead the public, I was simply creating awareness for her brand and along the line, we became friends.” She said.

Regina Daniel said she was warned about Jeruma’s quarrelsome nature and was careful in dealings with the Keyamata maker.

She said Jeruma had exploited every opportunity to user her influence for her own profit.

Jeruma, the sex therapist, said she paid the actress N10 million to promote her product.

Jeruma wrote: “A whooping N10,000,000…!!! You must be joking Gina…!! Jaruma and Regina were friends for a year before Jaruma paid Regina N10,000,000 just for the purpose of visibility and reaching more audience, since Gina was in the spotlight for marrying a much older man.

“In six months, Regina only posted Jaruma three times…!! Maybe because Gina felt Jaruma is in Dubai and so she can just do anyhow. Therefore Jaruma flew in from Dubai just to make Gina post at least three times a week.”

Jaruma said while Regina gave her baby $1,000, she gave the movie star’s mum one million naira in return on her birthday.