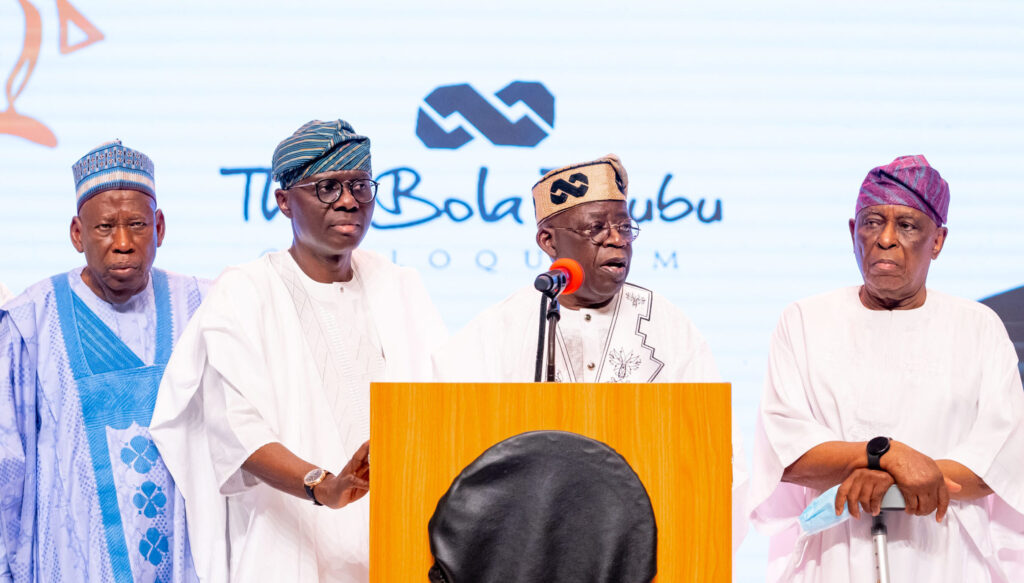 National leader of the All Progressives Congress (APC), Asiwaju Bola Ahmed Tinubu was shocked, on Tuesday, to realise that President Muhammadu Buhari, Vice President Yemi Osinbajo, Senate President Ahmad Lawan and a host of other dignitaries snubbed his 70th birthday colloquium, according to SaharaReporters.

SaharaReporters further gathered that Tinubu was therefore forced to call off the event which was only attended by two South-West governors and Governor Abdullahi Ganduje of Kano State while other expected dignitaries shunned the colloquium, which came only days after the much controversial APC national convention in Abuja.

Top sources familiar with the drama revealed that Tinubu used the Abuja-Kaduna train bombing only as a smokescreen to save face when he realised that the dignitaries had shunned the event and it would not get the momentum he so desired.

At the Eko Hotels in Lagos, the venue of the 13th Bola Ahmed Tinubu Colloquium with the theme, “Pivoting Nigeria Into The New Order,” Tinubu, while trying to hide his displeasure had said, “Today is supposed to be a very joyful 70th birthday of mine living on earth. I give thanks to God Almighty for being able to survive to this age. I have just been informed of a very sad incident in our country, very sad indeed, that over 60 people and many more were killed and bombed on a train between Kaduna and Abuja just last night. That is a very serious incident about the security of lives in this country and it calls for a very serious sober reflection.

“For me to be here celebrating, dancing and enjoying myself doesn’t show enough concern for a statesman and a senior citizen of this country. This event should not be held. I have consulted with the people you see around me here and they’ve agreed with me and being a very highly committed democrat, I have given myself to their suggestion that they agree that this event be cancelled.”

However, sources told SaharaReporters that Tinubu did not need to get to the venue of the event to make the announcement if he truly cared about the victims of the train bombing, which occurred on Monday evening, the previous night.

Buhari requests Senate to confirm INEC REC-nominee, four others as…

“Even the new chairman of APC (Abdullahi Adamu) was absent. The Kaduna incident happened the night before. It was all false that he cared about the train victims,” one of the top sources explained.

SaharaReporters also learnt that by shunning the event, the President and other chieftains of the APC were sending Tinubu a subtle but important message – you don’t have our support for 2023 presidency.

“They used their absence to send a final message to Tinubu that he won’t be their candidate. Tinubu had arrived in the hall and was ushered in by his supporters and even Governor Sanwo-Olu was ready to read his speech when the event was cancelled under the pretext that ’60 persons’ were killed in the Kaduna train bombing.

“He (Tinubu) only used that to save face; the truth is that he was embarrassed by the level of attendance despite assurances that heavyweights would attend.

“Even the Vice President (Prof Yemi Osinbajo) didn’t attend, though he was in Abeokuta the previous day,” another top source said.

Tinubu has been going round the country and meeting with traditional rulers and other leaders to seek support for his 2023 presidential bid which he called a “life-long ambition”.

He met with Buhari in January 2022 to formally declare his intention to run, saying he intends to step into his shoes, and not on his toes.