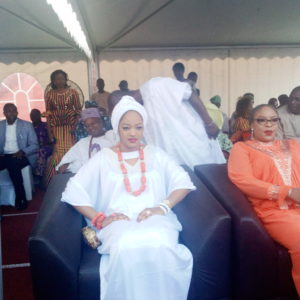 Queen Naomi Ogunwusi, Wife of Ooni of Ife, has urged Nigerian parents to instill Godliness in their children to promote a healthier society, aside education.

Ogunwusi said this in an interview with the News Agency of Nigeria (NAN) on the sidelines of the 2019 maiden Musical Festival and Award Night organised by the Caleb Group of Schools and University, with the theme: Joyful Tidings in Lagos.

She said that the knowledge of God was the best legacy a parent could give a child.

“Parents should train their children in the way of the Lord to promote a sane society.

“A child can have masters,PhD or even become a professor, but if he or she has no knowledge of God, it is stupidity.

“Make sure you enroll your children in schools that would add godliness to their education,” she said.

Ogunwusi, however, stated that music should be encouraged in schools because it is a form of communication.

She said that since education requires communication to be effective, music was also important to promote it.

The Queen also charged Caleb group of schools to continue to organise and promote similar event for the children who are the leaders of tomorrow.

According to her, the musical festival organised by the school was laudable and a huge success, which should be emulated by other schools.