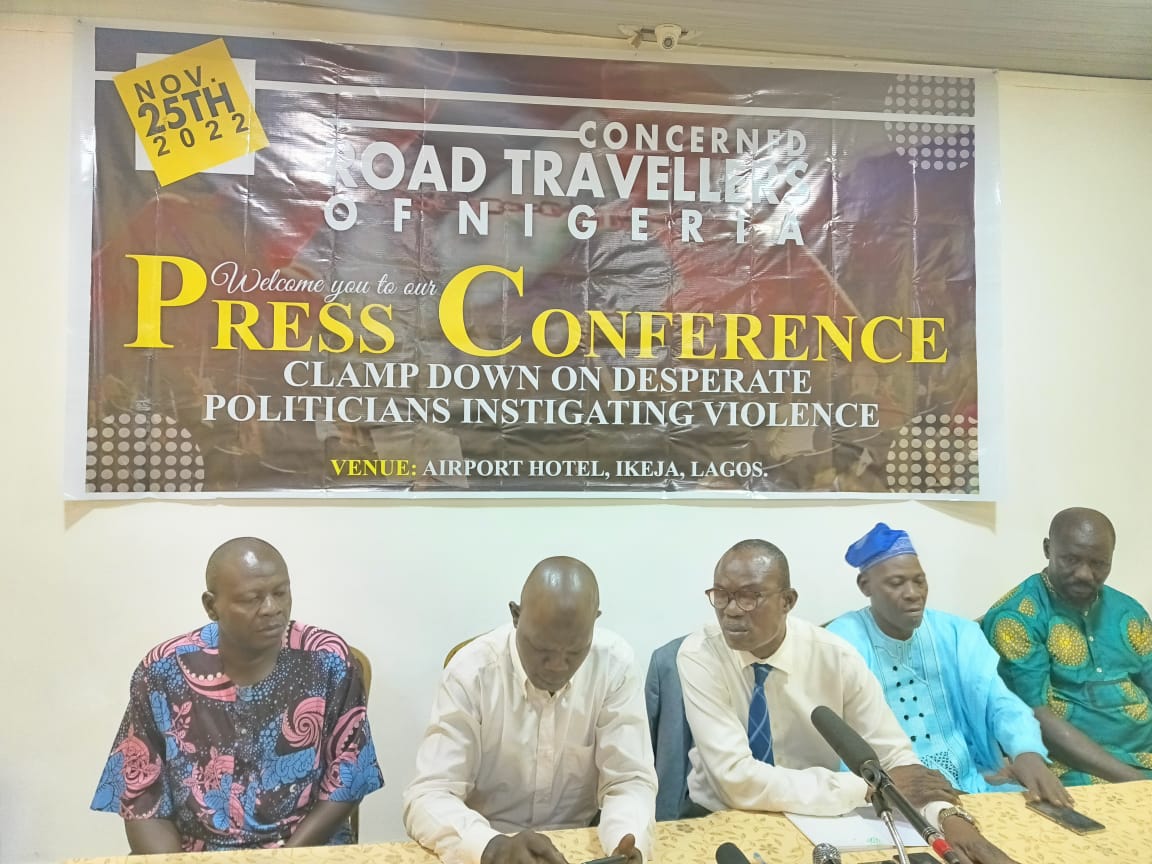 A group, the Concerned Road Travellers of Nigeria (CRTN), at a well-attended Press Conference at the Lagos Airport Hotel, Ikeja, Lagos State, on Friday, has called on security agencies in the country to urgently clampdown on politicians who are instigating violence and supporting criminal elements to return the state to its former insecure haven.

Specifically, the road users asked the security agencies to invite a Senatorial candidate of the Peoples Democratic Party in Kogi, Natasha Akpoti-Uduaghan for allegedly instigating violence with unfounded inflammatory statements that could be termed hate campaign on National TV, in relation to a terror suspect in Kogi State.

Addressing the press conference, convener of the group of Nigerian Travellers, Comrade Toyin Raheem, said Natasha’s alleged veiled energetic defence of a terrorist and her attempt at rubbishing a raid carried out by a security agency was not only suspicious but reprehensible.

Inviting the politician for questioning with the aim of ridding the larger society of hate campaign that could lead to bloodshed among the ethnic groups in Nigeria, according to the group, would give millions of Nigerian road users the assurance that their safety is secure, especially when plying Lokoja-Abuja road which is largely strategic and unavoidable for many travellers in the country.

Raheem, a Labour Party House of Assembly candidate in Lagos State in the coming general election in 2023 elections, described the allegations levelled by Natasha on National TV, as condemnable and a threat to the current peace being enjoyed in the state and the country at large.

Raheem warned that, if Kogi State is allowed to degenerate again into an insecure haven where violence and bloodshed are allowed to reign, that space won’t be safe for millions of Nigerians who pass through there on a daily basis.

His words: “I cannot imagine myself promoting violence against a people I plan to represent or be seen to be a sympathizer of violent criminals or terrorists. Like I have been emphasizing, Kogi State is strategically located between the South and the North and anything that affects its security, affects most Nigerians. Therefore, it is unfathomable that any politician for whatever reason(s) would be seen to be directly instigating violence with unfounded inflammatory statements that could be termed hate campaign on National TV, in relation to terror suspects in Kogi State or anywhere for that matter.

“It is in this respect that we strongly condemn the recent attempt to rubbish the job of our security agencies by a Kogi State politician, Mrs Natasha Akpoti-Uduaghan, who is also seeking election to the National Assembly.

“We have colleagues everywhere in Nigeria and we know what is going on in Kogi State in the politics scene.

“How would you expect to make people believe that a terror suspect that was reportedly nabbed by the DSS was picked by the government of the day because he crossed from one political party to the other? A review of her interviews on Arise TV and Channels TV should, ordinarily, compel security agencies in Nigeria to invite her for questioning with the aim of ridding the larger society of hate campaign that can lead to bloodshed, among the ethnic groups in Nigeria.

“One wonders what her real interests and intentions are for coming out so strongly in support of someone who has been alleged to be a serious security risk to the society. If Kogi state is allowed to degenerate again into an insecure haven where violence and bloodshed are allowed to reign, that space won’t be safe for millions of Nigerians who pass through there on a daily basis.

“On this basis, we, therefore, call on relevant security agencies, specifically the Department of State Services (DSS), to immediately invite Mrs Natasha Akpoti-Uduaghan for a comprehensive investigation to determine her real involvement with the detained terror suspect with the aim of halting any potential breakdown of law and order in that state. Politicians seeking elective posts must conduct themselves with decorum and whip supporters into line once they err.

“We cannot because of politics or desperation for public office become so careless as to become a security risk to our constituents and the nation at large. The way Mrs Natasha Akpoti-Uduaghan is jumping from one TV Station to another in a veiled energetic defence of Shafiu Fari Ahmed is not only suspicious but also reprehensible. She must not be allowed to have a free reign of instigating terror and other violent crimes in the name of politics,” he noted.

Raheem also lamented that some critical Nigerian roads had become kidnapping conundrums, specifically from the South to the North and vice versa.

Stressing the strategic nature of Lokoja-Abuja road, which is the main link between the North and South parts of the country, Raheem said the road which had been dreaded pre-2016, had become relatively safe under the current administration of Governor Yahaya Bello.

“Recently there has been an upsurge in kidnapping incidents on the Lagos-Ibadan expressway in addition to the punitive traffic on that stretch of road. That is, arguably, the busiest road in Nigeria and we call on the states concerned – Lagos, Ogun and Oyo states – the Federal Government and security agencies to rise to the occasion and keep the road safe for commuters,” he appealed.