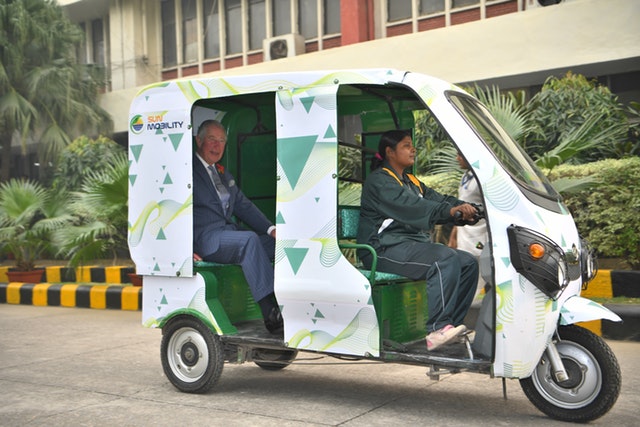 Britain’s Prince Charles discussed climate change and clean energy issues with experts and took a ride in an electric rickshaw on the opening day of his India visit on Wednesday.

Charles, 70, heir to the British throne, who arrived in New Delhi early Wednesday, began his visit as pollution levels hit ‘severe’ in the India capital.

The Prince of Wales visited the Indian Meteorological Department (IMD), where he was briefed on how the centre tracks and forecasts cyclones and other potential disasters, the British High Commission said.

The discussions with meteorological experts focused on ways to strengthen disaster resilience as well as combat the effects of climate change.

“India is one of the country’s most vulnerable to climate change. The IMD’s new early warning system has enabled India and other countries to prepare and respond faster to cyclones,’’ his Clarence House office said.

Charles, a prominent climate change campaigner, later went for a ride in a battery-powered electric rickshaw at the IMD office.

He also met with Indian winners of awards on environmentally sustainable energy  including the e-rickshaw and an app-based bus service  that are reducing pollution and congestion on Indian roads.

New Delhi, a city with a population of 25 million, has been ranked among the world’s most polluted cities in recent years.

Crop stubble burning by farmers in New Delhi’s hinterlands, along with climatic factors like lack of winds, add to emissions from heavy traffic, industry and the burning of garbage and fuel.

He hailed the community’s contribution in Britain.

He also attended a military service to commemorate the sacrifices of soldiers from India, Britain and the Commonwealth nations in the World War I and World War II.

Charles will meet with Indian business leaders in Mumbai on Thursday to discuss sustainable markets, the British High Commission said.

This is the British royal’s second visit to India in two years.

The journey falls on his 71st birthday on Thursday.

His last visit was as part of a joint tour with wife Camilla, the Duchess of Cornwall, to Brunei, India, Singapore and Malaysia in November 2017.

In all, he has made 10 official visits to the South Asian country.

South Africa reveals its blueprint for its energy future