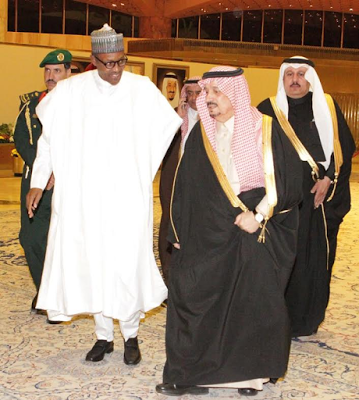 The News Agency of Nigeria (NAN) reports that the meeting, being held on the sidelines of the second day of the Future Investment Initiative (FII) Summit, is one of the last engagements of the President in Riyadh before departing for Makkah via King Abdulaziz International Airport, Jeddah, today.

While in Makkah, President Buhari alongside some members of his entourage, will perform the Lesser Hajj and also observe the Friday prayers at the Grand Mosque in Makkah.

The President had on October 30, met with King Salman bin Abdulaziz where the two leaders met on the sidelines of the second day of the Future Investment Initiative (FII) Summit in Riyadh and expressed their determination for deeper partnership especially in the areas of oil and gas for the development of both countries.

”In this regard, King Salman assured President Buhari of the willingness of Saudi Arabia to invest in Nigeria’s oil and gas sector, thereby strengthening the strategic partnership between the Saudi Energy company, Aramco, and the NNPC.

”Both leaders also discussed the current regional and global security situation, and President Buhari expressed his desire for a quick and peaceful resolution on contentious issues in the region,” Malam Garba Shehu, President’s spokesman said in a statement after the meeting.(NAN)