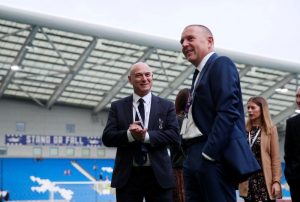 Completing the Premier League campaign and getting the new season underway will see much-needed funds flow to clubs in the lower divisions that are struggling due to the COVID-19 shutdown, Brighton & Hove Albion CEO Paul Barber has said.

Football has been suspended since mid-March due to the novel Coronavirus outbreak but the Premier League hopes to restart next month, initially without fans attending after the government opened the door for elite sport to return.

EFL clubs rely much more than Premier League teams on match day revenue and ticket income and its chairman, Rick Parry had said playing games behind closed doors could actually be a loss-making venture for some teams.

“If we can finish this season, get next season under way, then all of the solidarity payments that go through the Premier League to the lower levels will hopefully give those guys a boost as well.

“It will also enable them to get through a very difficult period,” Brighton’s Barber told reporters.

“There are a lot of mouths to feed and there is no easy solution other than getting the games back on as soon as we can and when it is safe,” Barber added.

“That will then start to turn the economy within football which enables us to make those distributions further down the game.” (NAN)