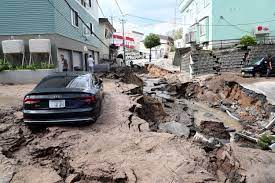 A powerful earthquake that struck Tokyo area, on Thursday night, had left 32 people injured and disrupted train services, on Friday morning, affecting around 368,000 passengers in total.

According to East Japan Railway Co. (JR East), the strongest earthquake caused services on the Shinkansen bullet train and 16 local train lines were cancelled or delayed.

“That resulted to many late-night train passengers stranded and a commuter disruption, on Friday morning.

“JR East resumed train services on Friday morning but many passengers were forced to wait at stations due to delays.

“After a train derailed in Tokyo’s Adachi Ward, one of the areas hit hardest by the temblor, the operation of the Nippori Toneri Liner, a driver-less guide way transit system in Tokyo, might be suspended for several days.”

The Japan Transport Safety Board has sent officials to investigate the derailment.

According to a tally by the Fire and Disaster Management Agency, two in Saitama Prefecture and one in Chiba Prefecture sustained severe injuries among the 32 injured people.

“The earthquake that struck the capital region at 10:41 p.m. local time Thursday reached upper 5 on the Japanese seismic intensity scale of 7 in parts of Tokyo and Saitama Prefecture.

“The last time that people in central Tokyo faced such an intense shake was the massive quake of March 11, 2011, which devastated northeastern Japan and triggered a tsunami and a nuclear disaster.”

Around 250 houses in Tokyo’s Shinjuku Ward briefly experienced power outages due to the earthquake and water stoppages and leaks were reported in central Tokyo.

The earthquake also caused 28 cases of people trapped in elevators in Tokyo and three neighbouring prefectures but all cases had been cleared according to the Ministry of Land, Infrastructure, Transport and Tourism.